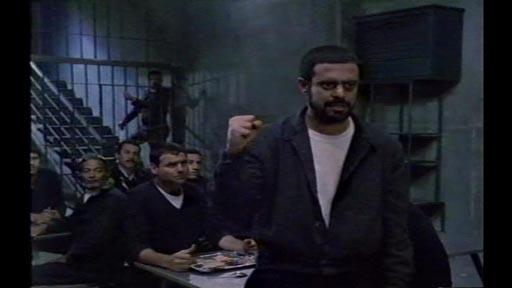 I can’t quite make up my mind about this one. I feel I should rate it highly, partly because of its brave treatment of the subject matter, and weirdly because it was nominated for an Academy Award (Best Foreign Film) in 1985, which could suggest (if not critical acclaim) merit of some type.

But it starts like so many uninspired, low budget prison films, with some scene-setting gratuitous violence: in this case, bizarrely, a prisoner returning from a home leave holding a staff member at knifepoint rather than submit to an enema. He’s then beaten and thrown in The Hole, albeit not for very long. When he emerges, we get to see a very different type of prison.

For a start, it looks like 1969, not 1984. And while much intellectual effort is now put into the best ways of preventing the radicalisation of prison populations, this clearly comes from a different era; Jewish prisoners and Arab PLO terrorists are incredibly managed side-by-side in the one cellblock in Israel’s Central Prison. There are predictable tensions between the two groups, but they mix together in the mess hall and at recreation and for much of the time there is an uneasy truce – but the tension on both sides is easily manipulated by the corrupt chief warder.

The leader of the Jewish prisoners, the enema-averse Uri (Arnon Zadok), and the handsome leader of the Arabs, Issam (Mohammed Bakri), are proud and strong and charismatic. The prison guards, on the other hand, are invariably corrupt, brutal, misshapen or walking anachronisms. When the Arabs are framed for the murder of one Jewish prisoner, and then another is found hanging, an unlikely accord is built between the Jews and the Arabs based on their contempt for their common enemy, the guards, and leading to a prisoner strike. And it’s in depicting the hunger strike that the film is strongest as the natural order of things is reversed; the loudest bullies weaken, one vulnerable prisoner – despised by both sides – stands firm, and the prison’s managers become increasingly desperate as they pull out all stops to break people down.

It’s a fascinating film, but uneven, with a tendency to lapse into cliché (the obligatory gang rape, drug use etc), and unlikely (the famed Israeli security toughness not being particularly evident as prisoners take staff hostages and set opponents alight with no major clampdown in response).

But all of this is interspersed with some powerful allegorical statements about the manipulation of conflict by those holding the power, and about finding common ground. The film is surprisingly sympathetic in its portrayal of the Arabs. And it’s the only prison movie I’ve seen where a prisoner’s dog is allowed to visit – but only on a non-contact visit, mind you. 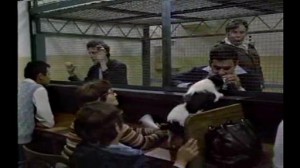