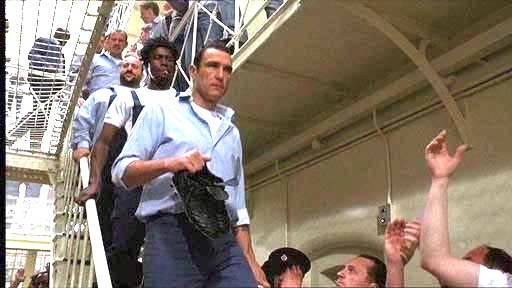 It’s not often that one screenplay gets made into three films. The Mean Machine is the British version of The Longest Yard (1974 and 2005), with a soccer match replacing the gridiron contest between guards and cons.

It stars Vinnie Jones (a real life captain of the Welsh football side, notorious soccer hard man and actor with definite limitations) as disgraced English captain Danny Meehan who finds himself doing a 3-year stretch for drunk driving and assaulting Police. Meehan is reviled by his fellow prisoners for having thrown a game – giving away a penalty in an international against Germany.

The film follows the same storyline as the two Longest Yards: he has to fight for acceptance, leads a team of prisoners in a violent confrontation with the officers’ team, is asked to throw the game, and has to decide what is most important – self-interest or his team-mates and self-respect. Is it any better for the cultural changes? Not much. It’s more understated, predictably; the match is witnessed by only a few spectators and there is no razzle-dazzle, for example. But the game is still sufficiently important, inexplicably, for bookies to take such huge bets on it that the magnificently-eyebrowed Governor needs to influence the outcome of the game, and the prison’s Mr Big makes a killing on it.  Hmmm.

The assortment of characters whom Meehan recruits to his team are also marginally less over-the-top than their American movie counterparts, so the humour is wont to be a bit more subtle in parts. One hopes nonetheless that there is not an Aussie Rules version somewhere in the pipeline. 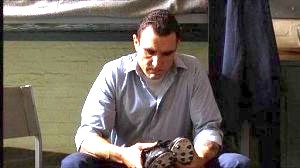