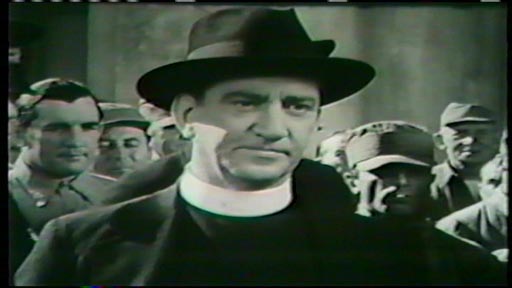 In 1939 Mutiny in the Big House hit the cinemas, with an awfully idealised portrait of a prison chaplain.  This movie, released the following year, gives us much the same fare – but because the chaplain is distrusted and reviled for most of it, it’s much more palatable.

The Reverend Tom Storm (John Litel) has just been appointed as chaplain of a big, neglected prison. He’s been a fervent critic of both the prison and correctional policy, and his commencement is not greeted all that warmly by the Warden. The good Reverend insists that the harsh conditions at the prison are not turning out better men: “We have made them men without souls!”

His first day involves your average induction to a new job: Go to the State Governor’s office. Meet the Warden. Accompany Warden to prison where riot is in progress and the prisoners and guards are exchanging gunfire. Offer to negotiate with the prisoners, who have taken guards hostage. Meet ‘Blackie’ Drew (Barton MacLane), the leader of the rioters. Get taken hostage yourself. Watch as Warden gives the order for the gates to be opened to allow the prisoners to escape. With a gun pointed at your back and you pointed towards the gate, overpower Blackie, grab the gun and see the whole escape bid foiled. Prevent guards from further beating the thwarted Blackie. Persist in trying to talk sense to the prisoners, who are a wee bit aggrieved at the manner of your intervention. Be known as a fink, thereafter. Normal Day #1 stuff.

Not long afterwards a truckload of new fish (a school?) arrives; amongst them Johnny Adams (Glenn Ford). The imposing (read ‘corpulent’) Captain of the Yard, Captain White (Cy Kendall) sidles up to him and pressures him to be his stoolie; he has placed him in a cell with Blackie and wants to know how, inter alia, the guns were smuggled in. What he doesn’t know is that Johnny has got himself into prison to avenge the death of his white-collar prisoner father, Andrew Lloyd, who died three years into a stretch for embezzlement, seemingly after receiving a beating from the Captain’s cane.

The Reverend doesn’t want Johnny to land in trouble; he’s been alerted to his real identity by Johnny’s gal, and sneakily brings them together – no mean feat as no self-respecting prisoner will have anything to do with the fink chaplain. One embrace from his gal is enough to tell Johnny to change his plans; he decides to abandon his idea of revenge, and to get out and marry her instead.

But it’s not that simple. Blackie is planning another escape, and is getting more guns in through the laundry. Captain White is continuing to put pressure on Johnny, and Blackie thinks maybe Johnny hasn’t been staunch. The Captain winds up like a beached whale with Johnny’s file sticking out of his back, with Johnny’s fingerprints on it, and too many witnesses, including the Reverend, happy to testify that he had the motive to kill him and was pleased the Captain was dead. Johnny is duly convicted and sentenced to death.

The Reverend knows it wasn’t Johnny. He confronts Blackie and calls him a rat for framing the kid and letting him go to the chair, when he had always done the right thing by Blackie. Blackie responds by deciding to bring forward his escape bid and to rescue Johnny from the punishment cells and take him with them. They cause a massive explosion in the boiler-room, which takes out some of the wall, and then Blackie has a change of heart and wants the other prisoners to desist. They shoot him. The guards then shoot a number of the escapees. With his dying words Blackie confesses to the Warden that it was he who killed Captain White; Johnny is saved.

There are plenty of worse prison flicks. All the characters, other than the vacillating Warden, are strong and credible. Litel’s no-nonsense, man’s-man chaplain can withstand just about anything… even the hat he has to wear. Tough, fearless, good with his fists – just what you want in a Man of God. MacLane shows why he was selected for so many prison movies, playing a terrific tough guy. Ford is solid, and Kendall is threateningly large. It’s good entertainment, and victory for the good guys. 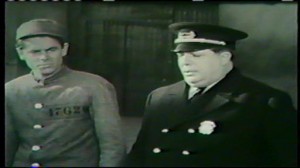 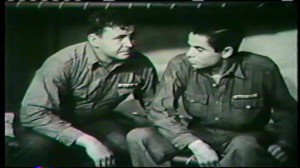