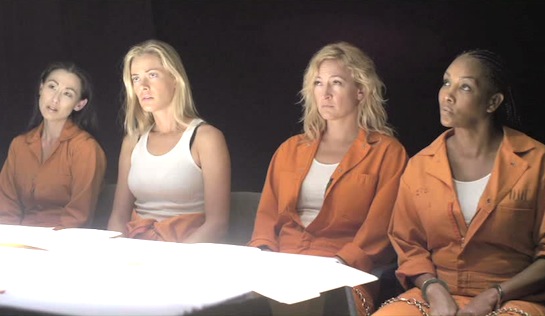 Oh dear. I fear that I’m becoming a little repetitive regarding these action prison movies… but this is truly lamentable.

We’re in Kazakhstan, in the middle of nowhere. The convoy taking the US President’s daughter, Elise (Tiffany Panhilason), through that nowhere is ambushed, and Elise is kidnapped. The kidnapper, a warlord named Ulrika (Brigitte Nielsen), demands US assistance in installing her the legitimate leader of all Kazakhstan, and hides away in her prison headquarters, known as The Citadel.

The CIA immediately assembles a team of four heavy-duty female prisoners to go and rescue the President’s daughter: Cassandra Clay (Zoë Bell), a crack soldier who broke just about very bone in her CO’s body after he sent her unit on an impossible mission in Afghanistan to show that women couldn’t be commanders; Kat Morgan (Kristanna Loken), who shot up her boyfriend’s truck – with him and his mistress in it; explosives-expert and techno-anarchist Mei-Lin Fong (Nicole Bilderback), in prison for blowing up a Wall Street bank; and Raven (Vivica A Fox), an ex-CIA operative who started moonlighting as a hitwoman, which was OK until she killed a CIA agent. They are promised pardons and reinstatements if they successfully carry off the rescue mission. Really? The CIA would be happy to re-employ someone who kills CIA agents for money? And crikey, it’s a sad indictment of the CIA that the four best female operatives it can find are all in prison.

Anyway, the prisoners are all given plenty of automatic weapons and sent off to Kazakhstan. They are eventually led to The Citadel by a US-loving teenager, Lexi (Alexis Raich), where they gain Ulrika’s interest by inviting her to seek a ransom for the daughter of a wealthy Chinese industrialist (Mei-Lin) whom they claim to have captured. They make it into The Citadel.

We don’t see a lot of the prison, which might be a good thing. A few cells, a few guards monitoring CCTV, and a few female prisoners forced into prostitution. And Ulrika’s violent sidekick, Grigori (Tim Abell), who is equally adept, it seems, at killing and sleazing when it comes to prisoners.

And then the real inanity takes over. There are the inevitable close calls, shootouts and betrayals. Ulrika’s team of hostile gunmen show themselves to be incapable of hitting a target with automatic weapons from metres away. Clay, who is the prison team’s leader, fights off gunmen unarmed and using hand-to-hand techniques, and her opponents are too stupefied to shoot her. When she defeats them, she routinely neglects to take their guns to disarm them or to use herself. And, ruthless mercenary that she is, she just walks away after knocking people down, or out, apparently finding it inconceivable that they would come to and re-enter the fray. She even spares the chief villain Ulrika’s life. Bad move, you’d think, but fortunately Ulrika in unable to shoot a prone, motionless Clay from just a few metres away, despite several attempts.  Aaaargh! 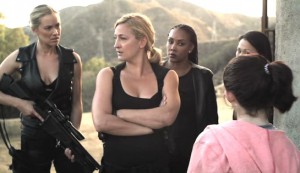 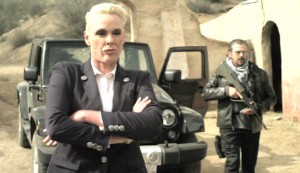