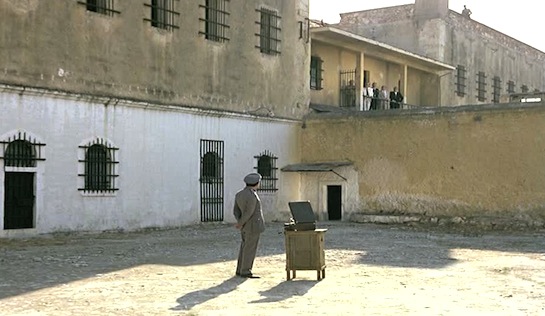 You know that I’m not a huge fan of the action genre. Well, there’s no danger of having to endure any of that tiresome action stuff here; this is as unhurried a film as it is possible to make about a prison hostage situation. There’s not even much dialogue in the film’s 105 minutes, all of which are heavily laden with absurdist political satire.

George Sofianos is a drug pusher… yes, in 1936. In the past he has served time for drug pushery, but in more recent times he has become an informer, his insider knowledge helping the police bust up several drug rings. Then a trade unionist is shot dead at a workers’ rally and Sofianos is arrested and charged with the killing. He maintains that he has been framed to silence him. He is detained awaiting trial in a private room, rather than a cell, in a prison where he has no contact with other prisoners.

Three months into his detention, he is visited by a Conservative MP, Kriezis, with whom it seems he is in a homosexual relationship. It’s most unlikely that you would deduce that they were in a such relationship from the film, but director Theo Angelopoulos’s official website says they were… and he would know, you’d think. Sofianos uses a smuggled gun to hold Kriezis hostage.

In response to the crisis, the prison leaps into action by doing almost nothing. It is agreed that they can’t use gas on Sofianos as he might shoot Kriezis before the gas takes effect. It is agreed that the room’s whitewashed window will prevent snipers getting any view of him. The assembled officials, including the Minister, the prison Warden, the Chief of Police and the Chief Prosecutor, are comically immobilised by indecision – partly because they are an ineffectual bunch, and partly because the Democrats have warned the Government that they will vote against it if it gives in to Sofianos’s demands, and the Conservatives have indicated that they will vote against the Government if he is not immediately released.

No-one, pointedly, tries to engage with Sofianos. Instead, the officials collectively resolve to try poisoning his coffee, but only after dragging in a Professor of Toxicology and forcing him to sign a document absolving them of all responsibility for the outcome. Sofianos senses the trap. The stand-off continues.

Ultimately a trouble-shooter is brought in. When night falls all the lights in the prison are turned off, except for the one in Sofianos’s room, and his silhouette can be seen through the white-washed window. The trouble is shot, and order is restored.

The film’s commentary, not just on the political situation in Greece in 1936 – the crisis around the time of former General Ioannis Metaxas breaking the deadlock between the Democrats and the Conservatives by seizing dictatorial power in a coup d’état in August of that year, ostensibly to ward off the Communist threat – but also on Greece’s contemporary political masters following the right-wing military coup d’état in 1967. Its thinly veiled criticism of these past and incumbent dictators – of their collective ineptitude, their unaccountability, corruption, and their inability resolve matters other than through violence, is nothing if not courageous.

The storyline is a little obtuse at the start, and much of the dialogue is in asides or hushed conversations, unintelligible to the viewer. “The dictatorship is embodied in the formal structure of the film. Imposed silence was one of the conditions under which we worked. The film is… made in such a way that the spectator realises that censorship is involved,” Angelopoulos notes.

At the film’s conclusion Sofianos’s corpse is placed on a cart along with the bodies of three men executed for escaping from the prison, and the inescapable conclusion is that the whole sordid hostage affair will be covered up and Sofianos’s demise will be written off as the execution of just another escapee. Job done.

It’s somewhat difficult to see this as a prison movie once the story is effectively wrested from the prison officials by politicians. Yet the prison’s initial inertia in the face of the crisis is its very own, and (like the dictatorships it represents) it seems to operate without any real leadership, relying wholly on sporadic shows of force; even a clamorous response by cell-bound prisoners to a song played to appease Sofianos is met with gunfire from the guards until the racket subsides. 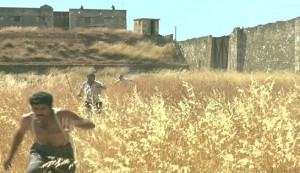 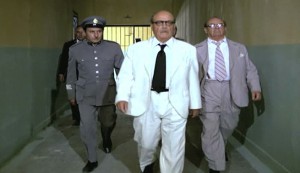