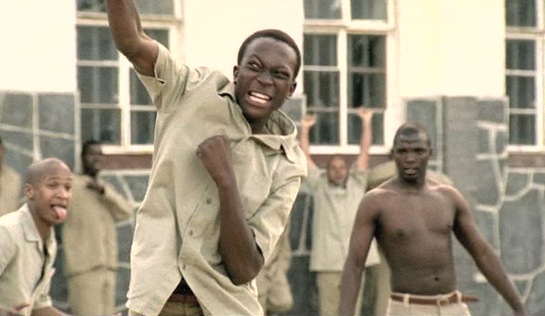 I’d thought that this was a movie based on real-life events, but no, it’s a dramatisation of those events interspersed with commentary from the real-life characters, 35 or more years on. A ‘documentary feature’ is what it is, apparently.

It is built around the reminiscences of five former Robben Island prisoners, Mark Shinners, Anthony Suze, Sedick Isaacs, Marcus Solomon and Lizo Sitoto, each of whom had been sentenced to a long term (between 13 and 20 years) for conspiring to overthrow the State in the mid-1960s. Their guilt would not appear to be in question, but at least two of them, Shinners (Presley Chweneyagae) and Suze (Wright Ngubeni) were arrested while still schoolboys and sent to South Africa’s most infamous prison – where Nelson Mandela had been held since 1962.

The film is not about their struggle against apartheid, although one claims that the fight to be allowed to play soccer in prison was not unlike the fight for freedom. To counter the brutal regime, the beatings, the abuse and the drudgery of work in the island’s slate quarry – all designed to break their spirit – the men continued to pester the guards for years, seeking permission to play football on weekends. It took around two years before the authorities were finally worn down and acceded to the request.

“Soccer saved many of us on the Island,” one says. It gave the prisoners something to look forward to and get excited about, an outlet where they could express themselves… and was almost certainly the only activity they could control. To celebrate, they set up the Makana Football Association in 1966 and organised themselves into eight teams, with rules and a constitution and a governing body. Soccer was taken very seriously indeed.

The MFA also served as a model for how the prisoners intended to cooperate on the political front, one rule insisting that the teams they formed not be organised in line with competing political affiliations. Any prisoner who did not know how to play was taught. At the same time, the competition broke down barriers with the guards, some of whom became fans of the spirited contests. For a number of the black political prisoners and the white guards, soccer represented a small piece of common ground, and humanised the other.

But it wouldn’t be a true film (or a documentary feature, it seems) without drama, and the film’s main dramatic element arises out of a single match. One team, the Atlantic Raiders, had formed by recruiting the best players from the other teams. They were drawn to play the Blue Rocks, a team of old men – plodders – and were eagerly anticipating a goal spree.  But the Blue Rocks took the lead early with a goal that was clearly offside, but allowed, and then formed a motley but immovable wall in front of the goal they were defending and the elite Atlantic Raiders players were unable to break through it. Blue Rocks 1, Atlantic Raiders 0.

Their pride mortally wounded, the Raiders players and supporters appealed against the decision. The appeal took five months to resolve… and not in their favour. The Raiders continued to sulk, protesting further by lying on the pitch and preventing others from playing. What had been an activity which had brought cohesion and joy and laughter to the prisoners became divisive and ugly. And it took a while for some prisoners – Suze being one of the principal offenders – to suck up their pride and remind themselves of what sport is about and that once it had made prison more tolerable.

The film is perhaps at its most powerful when these capable, articulate men describe the effect that the prison had on them. Solomon speaks tearfully of his sadness at leaving. He, like several others, had gone to Robben Island as a teenager, and was being released in his mid-30s. All his adult growing up had been in prison; it was where his friends were, and was all that he really knew. Outside the South African context it serves as a poignant reminder of the fear that nearly all long-termers experience as they prepare to go back to something they’d maybe never quite known… and which has moved on again while they have been away.

All five men transitioned successfully back into the community they had left behind. The film is silent on how soccer helped with that transition; one hopes it did. 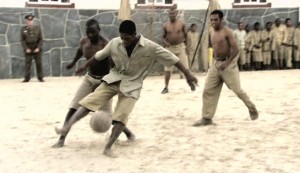 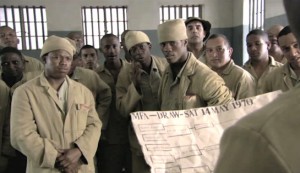