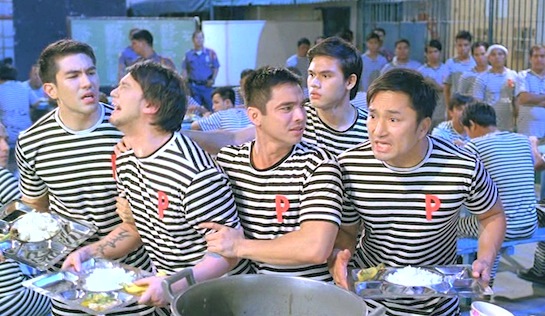 It’s a colossal problem for one-joke comedies when the one joke is not not particularly funny.

The one joke here is the stupidity of five friends – Albert Macapagal (Luis Manzano), Isaac Estrada (Billy Crawford), Mozart ‘Mo’ Twister Aquino (DJ Durano), Aristotle ‘Aris’ Ramos (Marvin Augustin), and Michaelangelo ‘Mike’ Marcos (Martin Escudero). They are drawn together as young schoolchildren by their shared and unrelenting dim-wittedness, and remain friends into adulthood (by which time they are still yet to finish secondary school).

The first 30 minutes of the film are spent establishing just how dull they are: including asking an ATM for money, struggling to find the way to Mike’s house (despite it being next door to Mo’s), and accidentally becoming dancers in a gay bar. They stumble into a church to witness the wedding of transvestite bride Becky Paminituan (John Lapus), whom they all fail to recognise as a former male classmate who had a crush on Albert. Becky is marrying a Japanese man and Mo distractedly starts reciting the only bit of Japanese he knows – “Your spouse is gay” – and the others stupidly join in. The groom overhears and asks Becky whether it’s true, she confesses, the groom drops dead and Becky vows to pay the Moron 5 back for robbing her of her one chance at happiness. Soon thereafter she implements an impossibly elaborate plan to set them all up for the murder of her father, and the 5 are duly charged and head off to jail.

Their time in the Rizal Provincial Jail accounts for just a fifth of the film. There are fart jokes, a major meltdown over a meal not containing okra, and more laughs as the 5 are quickly preyed upon by the smarter, nastier prisoners (more old schoolmates). Isaac’s mother, who values his siblings’ academic achievements above all else, happily tells him, “You’re better off in prison. So you can’t hurt people.” And get fed, and get to wear a uniform. Becky, the chief witness against them, turns up at the prison to taunt them.

The 5 decide to escape. Their first attempt involves them painting themselves white to blend in with the wall behind them as they edge towards the exit. It nearly works. They toy with the idea of escaping by tightrope-walking down torchlight beam at night, until one of them suggests that the battery might go dead and they’d fall. Against the odds, they manage to escape in a garbage truck – and are then welcomed very unsympathetically by their families who tell them to go back to jail.

They don’t, but try to track down Becky to prove their innocence. This involves more dumbness, a variety of disguises, some stupid luck and a dramatic finale.

Fans of this sort of comedy might object to me describing Moron 5 as a one joke film. They might even point to Becky, the super-smart vengeful transvestite, as a discrete, second joke, but on balance I think she’s simply there to provide a series of counterpoints to the super-dumb, artless, straight guys. In some ways I found this an uncomfortable viewing experience. There is no suggestion that any of the Moron 5 are intellectually disabled, but their functioning on practical tasks is at a lower level than all but the most severely disabled. How funny is that? And the 5’s prison experiences, borrowed in part from other populist prison films, speak of a very fanciful, make-believe Filipino prison.

It’s not just that this is unsophisticated; it is comedy pretty much devoid of wit. And as happens not uncommonly with the more inane and the more pedestrian popular movies, it has spawned a 2014 sequel, Moron 5.2, The Transformation. Which is a little sad and depressing. 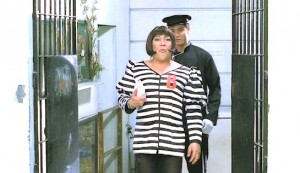 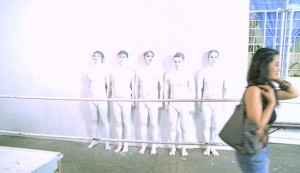 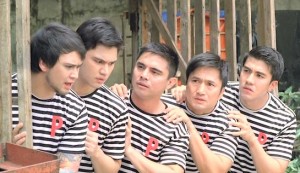 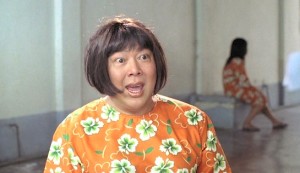