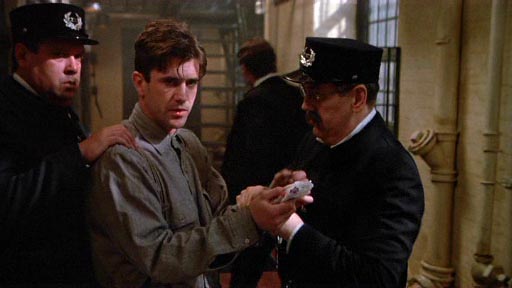 Pittsburgh, 1901; splendidly cold and bleak. Two brothers are on Death Row for 90 robberies in 90 days, including one crucial one in which a grocer was shot and killed. One brother, Jack Biddle (Matthew Modine), is almost certainly innocent of the murder; his brother Ed (Mel Gibson), might be as well. They are bad boys but charismatic enough, apparently, to make women swoon and jealous men doubly intent on seeing them hang.

In the very same Allegheny County Jail, the Warden’s wife, Kate Soffel (Diane Keaton), gets out of her sick bed where she has been convalescing for months and, praise the Lord, immediately resumes handing out bibles and ministering to the inmates. She soon falls for the smoother of the Biddle boys, Ed, helps the brothers escape by smuggling hacksaw blades to them, and when they break out, joins them on the run. Predictably, it doesn’t end well.

It’s based on a true story, so it makes no sense to say that it just wouldn’t happen; clearly it did. But the film fails to make tangible the sort of passion that might move a woman to abandon both her reputation and her family, and to throw her lot in with a criminal whose prospects are, well, poor.

Sure, her four children are portrayed as a bit uninteresting, and Ed is younger and handsomer than her rather stuffy and strait-laced husband, Peter, but he is certainly resistible, one would have thought – angry, arrogant, and scoring not nearly high enough on the magnetism scale. True, Mrs Soffel is a committed opponent of the death penalty who is no doubt attracted to the idea of helping the boys escape the noose, but she seems to have resisted being seduced by any of the previous Death Row inmates with whom she has had contact. Perhaps she was simply attracted to the Biddle boys’ pop-star-like reputations, or Ed just caught her at her most vulnerable, but her romantic interest in him seems to have been ignited out of too little.

Which is a shame, because it’s a magnificently shot film, with austere streetscapes, expansive winter landscapes… and an architecturally beautiful old prison. In fact, for me, the 5-tier Allegheny Jail is the star of the show: more real and dignified than Diane Keaton, more charming and characterful than Mel Gibson..

In the real-life story, a fellow member of ‘The Chloroform Gang’ testified against Ed and Jack and ensured that they went down on the grocer’s murder. Katherine Soffel smuggled a gun into them with the help of a guard, a relative. When they were hunted down and their capture was inevitable, Ed shot Kate (by agreement) and the two men were shot by their pursuers. Ed and Jack were still alive when taken back into prison custody, but both died soon after. Kate somehow survived and served out her sentence back in Allegheny Jail. 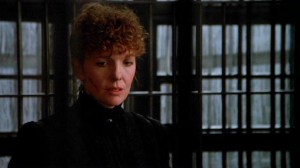 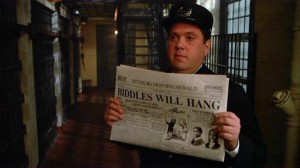 Thanks to LS for pointing me in Mrs. Soffel’s direction.