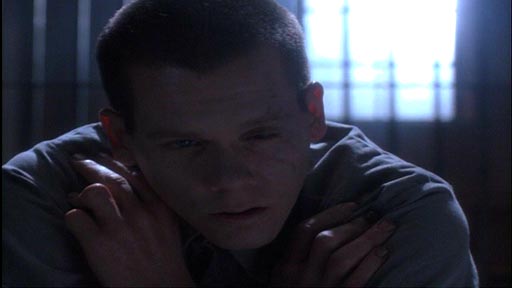 In January 1939 Henri Young was one of four prisoners who took part in a failed attempt to escape from Alcatraz. This film purports to give a ‘fact-based’ account of his story.

It depicts him as an orphaned child who out of desperation steals $5 to care for his sister, and is then placed in Alcatraz to make up the numbers. After the unsuccessful escape bid, he is placed naked in a totally dark dungeon for three years, beaten regularly and, contrary to the rules that also set 19 days as the limit for solitary confinement, allowed only half an hour’s exercise each year.

On his eventual release from The Hole – cowed, stooped, barely-human and struggling to come to terms with light and people – he is met by the Associate Warden who slices through his Achilles to make sure he won’t attempt to run again. Within hours, the film suggests, he stabs one of his fellow escapees in the neck with a dining room spoon, killing him, after being told that the victim had informed on him. Not quite as disoriented as first thought, then.

His case is handed to a novice defence lawyer who, against all advice, puts Alcatraz’s treatment of Young on trial and gets him off the murder rap – and prompts an inquiry into the Alcatraz regime, resulting in the use of the dungeons being banned. As a courtroom drama with a prison regime also on trial, it’s stirring and effective, and Kevin Bacon puts in a terrific performance as Young – broken, frightened, autistic-like, and fatalistically negotiating a relationship with his attorney (Christian Slater) that meets both their needs.

But as a historical record, the film is apparently a big flop: Young was seemingly far from the non-violent guy he is portrayed as prior to arriving at Alcatraz, he was not managed in a dungeon, and indeed had been out under the normal regime for a year before he murdered the stoolie with knives he sharpened in the prison workshop. One can imagine that Alcatraz wasn’t the most comfortable of abodes, but in retelling Young’s story it seems that poetic licence may have been taken just a bit too far. Which is a shame, because it ultimately robs the film of much of its potency.

One appreciates that the images of Young emerging a savage from his three years of experiencing the worst brutality imaginable heighten the viewer’s emotional desire to see justice done, but it’s like shooting fish in a barrel; putting a prison on trial for what is a ‘normal’ response to an event like an attempted escape by a violent man who claims the prison did not cure him of his violence would make the more interesting debate.