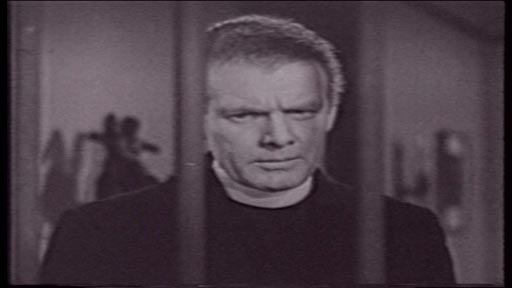 Based loosely, it seems, on the story of Father Patrick O’Neil who helped quell a riot at Canon City Prison in Colorado in October 1929 in which five prisoners and eight guards were killed, this film is an unabashed tribute to all prison chaplains.

Charles Bickford plays Father Joe Collins, a sort of man-of-God prison-reformer superhero. Fr Joe has the run of the jail and seemingly knows every one of the several thousand of inmates. He’s dedicated, having turned down cushy retirement offers to stay looking after the men who need him. He’s straight talking, whether it’s to hardened prisoners, hard-boiled wardens or parole boards. But he’s also compassionate and can recognise the good in any man – whether it be a murderer who’s about to be executed or newly received prisoner Johnny Gate, who is serving 1 to 14 for forging a $10 cheque to help his ailing mum.

Johnny is put in a cell with hard man Red Manson, who makes it clear that he doesn’t like interfering, do-gooding chaplains. This doesn’t deter Fr Joe, who can stand up to the worstest and the toughest criminals. When Red leads a pack of prisoners in seizing guards’ rifles in a brazen attempt to escape, it’s a signal to Fr Joe to roll up his sleeves, ditch his dog collar and march off to speak sense to Red and his fellow mutineers.

I’m still not sure why the prisoners with the guns don’t just shoot Fr Joe when he opens up some cracks in their unified group by urging those who have the most to lose in a bloody escape bid to back down, but they don’t. Johnny repays the good Father’s faith in him by helping the guards wrest back control, and good triumphs over evil. And to prove what a truly good man he is, Fr Joe stops the guards from giving Red a hiding once it’s all over.