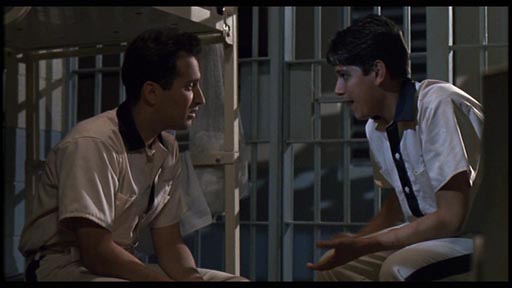 I knew that this wasn’t a prison comedy per se, but people persist in including it in their lists of prison movie favourites. I have no idea why. I mean, no-one lists The Italian Job (1969) as a prison movie despite Noël Coward’s cameo as Mr Bridger constituting some of the best prison scenes of all time.

Billy and Stan are two New York college kids travelling through Alabama. They stop off for supplies and not long after get arrested for the murder of the store clerk, and get sent to prison. Billy’s lawyer cousin, Vinny Gambini (Joe Pesci) is despatched to represent them. He arrives with his sassy fiancée, Mona Lisa (Marisa Tomei) in tow. He’s inept. He’s never handled a criminal case in his six-week legal career and knows so little of legal procedure and etiquette that he manages to get himself thrown in jail a few times for contempt. Billy is inclined to stick with him on the basis that (i) he’s family and (ii) arguing is what the Gambinis are best at. Stan opts instead for the public defender, who gets so nervous on his feet in court that he can hardly speak.. so Stan promptly sacks him as soon as Vinny starts to come into his own. Of course Vinny gets them off, but not before Mona Lisa (who comes from a family of mechanics) gives the best expert evidence on general automotive matters you’ve ever heard. It’s a terrific finish, with Tomei stealing the show.

But the prison scenes, filmed at the Lee Arrendale Correctional Institution (in Alto, Georgia) are a tiny, tiny part of the movie and nothing to write home about. By that I mean ‘not funny’. Mind you, credit should be given for mostly avoiding the temptation to resort to standard prison comedy jokes about fear of prison and exploiting the rest of the prisoner population for laughs. Except for where Stan mistakes Vinny (whom he’d not met) as a fellow prisoner intent on sodomising him; the double entrendre-laden scene is only marginally more amusing than the less subtle preoccupation of Big Stan. Much better is Vinny tipping the bemused guard who delivers him to the boys’ cell. And the white-and-navy prisoner uniforms which reminded me of sailor suits – but I’m not sure they were supposed to be funny.

It’s not a bad film at all… just nothing like a prison film. 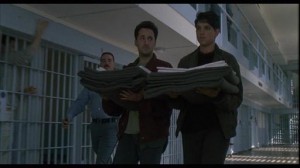 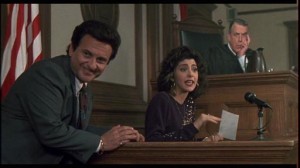