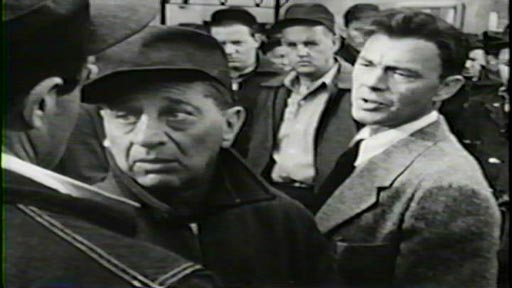 There might be a bit of sentiment in me rating this so highly. I well remember reading the book by Donald Powell Wilson on which it is based, nearly 40 years ago… and being awfully impressed. I just can’t remember why.

‘Doc’ Wilson (John Beal) is a college professor and psychologist who commences work at ‘Harbor State Prison’ (filmed at San Quentin). He is more scientist than counsellor, and has a large battery of tests at his disposal. He does explain what they’re for, but we never really see one being put to any practical use.  He has a hard job. He’s new. The role is new. The Warden would prefer him to pass on information about the prisoners, which he can’t do. The prisoners refer to him as a ‘bug doctor’ and are rowdy, disrespectful and suspicious. Will it surprise you to learn that he wins their trust and respect by the end?

He needs helpers, and recruits six inmates to help him administer the tests, score them, and so on. So much for his ethical stand about passing on information. Anyway, they’re a motley bunch: James T Connie (Millard Mitchell, fresh out of his role in Convicted), an intelligent, showy, shifty safe-cracker who can arrange anything in the prison; the influential and excitable Punch Pinero (Gilbert Roland), murderer and hard man, due to be deported to Italy; Steve Kopak (Jay Alder), who has done ten years for bank embezzlement and is afraid of living on the outside; Blivens Scott (Marshall Thompson), a talented drunk; psychopathic killer Dawson (a young Harry Morgan); and Clem Randall (Alf Kjellin), a troubled young man.

The film’s strength is in its portrayal of day-to-day life in the prison workplace. There’s humour, fallings out, rivalries, practical jokes, scams, fights… and an attempt to show prisoners as people. That almost works; Connie is the most complex but is also a caricature in many ways, Pinero is a bit two-dimensional, heart-of-gold tough-guy, Kopak is hopelessly institutionalised without us really understanding why, and the others are very sketchily drawn. Still, there are plenty of scams (generally the streetwise criminal classes taking advantage of the naive educated man) to keep things moving along and light and breezy. Until the Doc’s ethics are put to the test by something he learns while he has Randall under hypnosis, and Dawson tries to escape with a  smuggled gun.

It’s different to most prison flicks, and all the better for it. 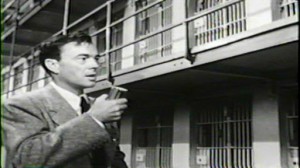 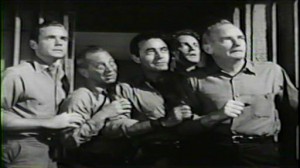