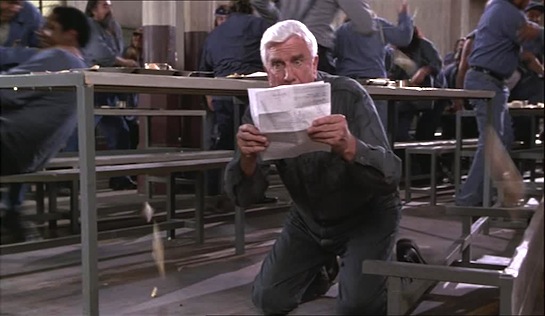 You know what you’re getting with the Naked Gun series, and questions like, “Is it sensible to select a high-profile cop to go undercover in a large maximum-security prison?” are happily irrelevant.

33? brings Police Squad’s Lt Frank Drebin (Leslie Nielsen) out of retirement and into Statesville Prison, working undercover as Nick ‘Slasher’ McGurk, hoping to put a spanner in the works of a major terrorist plot. He is placed in a cell with convicted bomber Rocco Dillon (Fred Ward), who is planning to (i) bust out, and (ii) set off a giant bomb at the Academy Awards.

In just 12-odd minutes inside, 33? does a very serviceable job in taking the mickey out of four prison movie standards – the exercise yard (where some prisoners play on swings and slides and others pole vault over the wall), the shower (in which Frank is asked to pick up the soap and in doing so reveals iron shorts protecting his chastity), the mess hall riot (during which Frank eats reams of paper in the hope of destroying Rocco’s escape plans), and the escape tunnel (where, à la The Wooden Horse (1950) and every other tunnelling escape movie before and since, disposal of the excavated dirt proves to be a major problem).

The films boasts the same all star support cast that featured in the earlier Police Squad movies – Priscilla Presley as Jane, Frank’s wife, George Kennedy as Captain Ed Hocken, OJ Simpson (just ahead of those pesky 1994 murders of which he was acquitted), as Detective Nordberg, and Anna Nicole Smith as Rocco’s moll, Tanya Peters.

It is classic Naked Gun: slapstick, puns, and scores of rapid-fire gags, most of them hitting the mark. Prison comedy is rarely done this well, even if it’s only for 12 minutes. 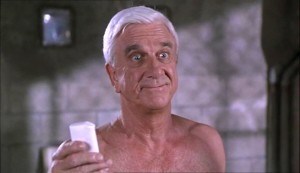 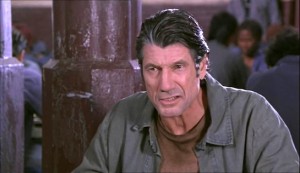