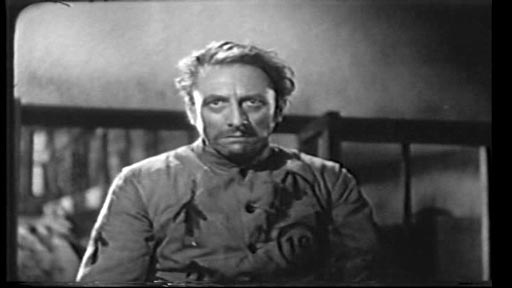 “A little too full of the joy of life, eh?” says the sadistic Justice of the Peace, Squire Meadows, to a miserable female prisoner who has been charged with unruly conduct (to wit, singing in her cell). “We must curb that! No doubt five days of bread and water will tend to take the happiness out of your disposition!”

This is a massive melodrama with a wonderfully hammy villain, based on a book written by Charles Reade in 1856. The film claims that the book prompted Queen Victoria to demand to know if such brutalities were being carried out in her name, and led to major penal reform. Which, if true, is a good thing for such a histrionic story to have achieved.

Squire Meadows (Tod Slaughter) is the moustache-twitching villain, and the star. He is rich and desperate for the affection of local farmer’s girl, Susan Merton (Marjorie Taylor), who unfortunately for him is in love with a poor tenant farmer, George Fielding (Ian Colin).

Meadows sets to work to improve his chances with Susan. Aware that Susan’s father won’t allow her to marry someone who can’t bring at least ?1,000 to the table, he prevents George from being able to make a living by foreclosing on his mortgage. At the same time, he curries favour with Susan’s father by forking out ?500 to save him from a similar fate, even though there was no genuine prospect of that occurring. He also tries to get George arrested on a phony poaching charge, but George’s unorthodox (read ‘non-church-going’) friend Tom (Jack Livesey) realises what’s going on, and gallantly steps in – claiming to be the poacher. Tom is duly sent to gaol, while George sails off to Australia for two years to join the gold rush – but not before he and Susan make a solemn pact to wait for each other.

The gaol into which Tom is placed is pretty dreadful. In no time at all it transforms him into a desperate, fearful man, seemingly on the brink of madness. Punishments are meted out arbitrarily by the visiting justices, of whom Squire Meadows is by far the most enthusiastic. Meadows so enjoys his role as disciplinarian that he drops into the prison daily in order to keep his ‘naughty children’ in line – haranguing, baiting, and ordering beatings with the cat o’ nine tails, or stricture in an upright straitjacket, or more revolutions on the ‘wheel’ in the labour yard.

Now, I know nothing of the governance of mid-19th century British prisons, but it a curious arrangement where the Governor of the prison answers to visiting justices. But this Governor too is cowed, and makes his position on the treatment of his charges clear enough: “Now I’ve never been in favour of this ‘separate and silent’ system,” he confides to his chief warder. “But the visiting justices have ordered it and it’s my duty to carry out orders. And I’d rather a prisoner has a few extra lashes with the cat, or a few more hours in the black hole than to lose my job.” The warder agrees. Tom continues to struggle. Only the prison chaplain makes any sort of a decent stand against the brutality.

Meadows, meanwhile, leaves little in his quest for Susan to chance. He intercepts the mail back from Australia so that Susan believes that George has not written to her, and then starts a rumour that his rival has met up with someone else and is planning to settle in Sydney. Susan reluctantly comes to believe this to be true. She gives in and agrees to marry Meadows.

But all is not lost! Tom has been released from prison and is immediately back to his old carefree, debonair self, looking no thinner and no worse for his ordeal. He meets up with George, who – by chance – has just returned from Australia (the day before Susan’s wedding), with ?7,000 worth of gold dust in his pocket. Meadows learns of George’s return, finds him, drugs him, thinks he’s drugged Tom as well, steals George’s ?7,000 and awaits his bride.

Of course he is exposed, and the final scene is of him back in his prison… working the wheel.

It is an enjoyable romp. Meadows is wonderfully evil, Tom wonderfully noble, the prisoners thoroughly morose, the chaplain thoroughly good, and George and Susan… well, pretty uninteresting. There is never the slightest doubt how it will finish up, and its message is not subtle (embodied by the subplot of a 15-year-old boy, in prison for stealing a loaf of bread for his starving mother who subsequently died, being punished to the point of exhaustion and death in the chaplain’s arms). But it entertains and, like the book almost a century beforehand, provides a persuasive argument for the merit in treating prisoners decently. 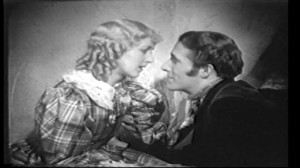 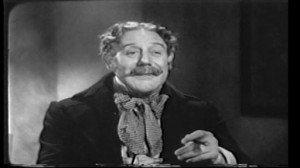