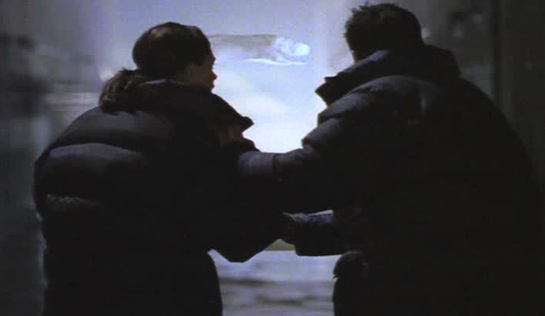 The ‘New Alcatraz’ is a secret supermax prison built “somewhere in Antartic (sic)” and funded by the world’s leaders to contain the world’s worst criminals…. a little like the outer space prison a decade or so later in Lockout (2012). It’s clearly a work in progress; we’re told that when it’s fully operational it will hold 25,000 inmates (so much for the fragile Antarctic ecosystems), but for the time being it is holding just six prisoners and there are just the warden, nine guards, and two engineers to look after them.

Although it’s set in the Antarctic and it’s said to be minus 67°, it’s clear that Global Warming is having its effect; most of the staff are clearly not dressed for such weather and they don’t appear to need gloves, even when outside and climbing metal ladders or when complaining that the heating hasn’t been working. Or perhaps they’re just really, really stoic.

Anyway, Princeton palaeontologist couple Dr Robert Trenton (Dean Cain) and wife Dr Jessica Platt (Elizabeth Lackey) are whisked away from a major fossil site somewhere and taken to the South Pole when the Warden’s reckless decision to bore into a hollow rock beneath the prison releases a giant prehistoric snake that has been preserved in pure nitrogen for millions of years. It seems that Robert and Jessica have been selected not because they are tediously at loggerheads over a woman’s right to choose between a career and a family, but because they have been promoting an unpopular theory that 20 million years ago the Antarctic was a tropical forest teeming with lizards. It’s thought they might provide expert advice to the US Army on defeating giant killer snakes.

And expert advice is indeed needed; the giant killer snake racks up some impressive victories, firstly against the prison guards and then the army. Robert thinks that the snake has taken Jessica, too, but it turns out that it was all a dream or she somehow managed to outrun it or hide from it or trick it. In desperation and thinking that he has lost his wife, Robert convinces Warden Fred Rylie (Craig Wasson) to release all the prisoners, whom he assumes will have some expertise in escaping from prisons, to assist them all in getting out alive. The six prisoners – two Chechnyans, an Iraqi chemical weapons builder, a female IRA operative, a South American anti-American terrorist (seemingly from Argentina) and a computer hacker – are issued with automatic weapons after promising that they won’t hurt the Warden, and set out to hunt down the snake.

The snake’s impressive run continues, however, and Robert, Jessica and the smarter of the two Chechnyans, Yuri Breshcov (Mark Sheppard), are the only ones still alive and able to make it onto a waiting plane… not realising that the snake has joined them, too. Oh oh.

What does New Alcatraz contribute to our understanding of prisons? Nothing, but nor would you expect it to.

What do the palaeontology professor and his wife add to the film? Nothing, other than giving the audience an attractivish couple in whom we can try to be interested – in a film otherwise dominated by an unlovable but even-handed collection of terrorists, an impatient, blaming Warden, a gumption-lacking head guard, and a hungry, prehistoric, animated snake.

Personally, I was rooting for the snake.