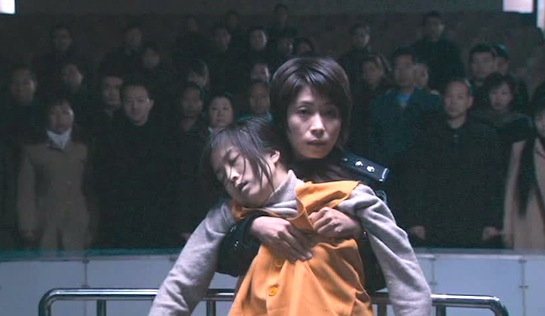 This, I think, is the first movie I’ve put on this site that has absolutely nothing to do with prisons… although it does include a prisoner or two. I made the mistake, you see, of reading other reviews that suggested that it is about a prison guard who embarks on a relationship with a man who is the bereaved partner of a woman in whose execution she played a part. Not quite.

Wu Hongyan (Liu Dan) is a lonely woman who has been widowed for ten years. She travels from Pingchuan on the night train to Xincheng to attend joyless dances organised by a dating agency, miserably aware of the horribleness of it all.

Her job is not in fact that of a prison guard, but as a bailiff in the Pingchuan Middle Court. One of the team of bailiffs’ tasks is to carry out court-ordered executions. And one of the prisoners whom Wu guards in the court is Zhang Lingling (Meng Haiyan), a young mother who, it seems, was prostituting herself to make ends meet and stabbed a client to death. Zhang is duly sentenced to death and it falls to Wu to execute her; a disturbingly intimate affair involving white gloves and a handgun.

Zhang’s grieving partner, Li Jun (Qi Dao), later overhears a conversation in which Wu is revealed as Zhang’s executioner, and he starts following her. He has lost both his partner and their child (whose custody the court awarded to Zhang’s brother), and is out for vengeance. Wu senses that he is following her and hides from him before finding his pursuit of her exciting, and soon enough Li is engaged in rough sexual congress with his partner’s killer whom he wants to kill.

Wu discovers, a little later than she would have liked, a photo of Li, Zhang and their son together, and at the same time Li’s vengeful intent is starkly revealed. She has a problem.

So, we don’t get a prison; just a function that is more commonly associated with prison. And a bleak picture of industrialised provincial China; drab, desolate, uncared for buildings and landscapes serving as metaphors for its inhabitants’ relationships and its judicial system.

It is a compelling film; slow-paced and built around Wu’s stillness, the unconnectedness and lack of warmth of all around her, and the sense of dread. It’s just not a prison movie.