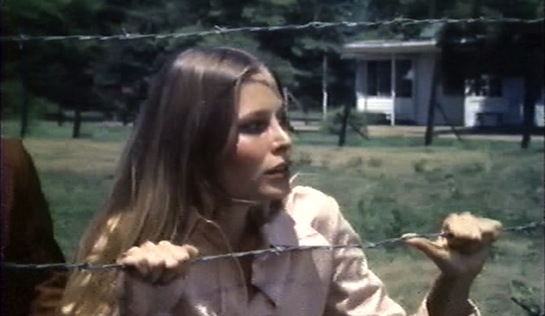 You could be forgiven for thinking that this is just another exploitative Women-in-Prison movie. And it probably is. But it duped me, somehow, into thinking it might be something more.

It concerns two beautiful UCLA girls on a summer-break road trip before they head back to college. Cathy Phillips (Deborah Raffin) and Diane Emery (Lynne Moody) are passing through a little Southern town when they encounter a racist sheriff (Chuck Connors) who seems to struggle with the concept of a white girl and a black girl being in the same car. He sleazily pursues them. “Do you like to dance?” Diane asks him. “Sure,” says Sheriff Danen. “(Then) why don’t you twist on this?” she replies, holding a fork prong-upwards. It proves to be not the smartest bon mot ever.

The Sheriff has their car immobilised and soon after arrests them both for trespassing. While the women are held in custody pending the court hearing, he rapes Diane and later, in court, claims that she came on to him in order to get a prostitution charge dropped. The Judge gives the two girls 30 days in the Badham County Prison Farm for Women.

The prison farm is exploitative in very sense. Its politically-connected warden, Superintendent Dancer (Robert Reed) has a penchant for young girls and gets kickbacks from local businesses for whom he provides cheap labour. There are no guards; the day-to-day running of the prison is left to armed trusties who are no less sadistic, bullying and sexually voracious than most WiP movie guards.

It’s a tough ol’ prison. Diane is thrown in a tiny punishment box after trying to stow away on the visitors’ bus. Other women are whipped for minor transgressions, lesbian trusties arrange trysts with new prisoners, a 15-year-old runaway commits suicide after being raped by the Warden, and there are stories of many women being disposed of (rather sloppily, it seems, as the burials occur in full view of the prisoners’ dormitories) after dying in suspicious circumstances. While the other women receive visits, our two heroines are not allowed to contact family, which requires them to be more creative if they are to draw attention to their treatment.

The white prisoners are segregated from the black prisoners, naturally, and Cathy and Diane have to sneak time together. They are discouraged from escaping and trying to blow the whistle on the corrupt regime: no white townsfolk would help a black woman, they’re told, and no black citizens could afford to. But in the end they do escape – pursued by both hound-dogs in the best Southern prison farm tradition, and the Sheriff, who has some special motivation to make sure that two educated, civil-rights-savvy Californians don’t get out of the county alive.

So why is it any better than the standard movie about fish-out-of-water prisoners in a cruel, corrupt prison – particularly as it fails to resist the temptation to feature under-dressed women, gratuitous nudity and a cat fight? On reflection, I may have been momentarily swayed by its message of the need to fight against the commercial exploitation of prisoners and, more importantly, its spirited opposition to institutionalised racism. Any racism.

Brubaker (1980, the benchmark film dealing with this type of prison) it ain’t, but if you wish you can access it easily on You Tube – both in its initial made-for-TV format and the unexpurgated, longer version with its discordant titillating bits. 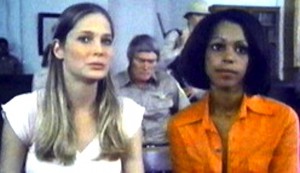 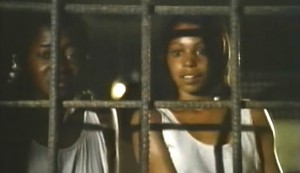