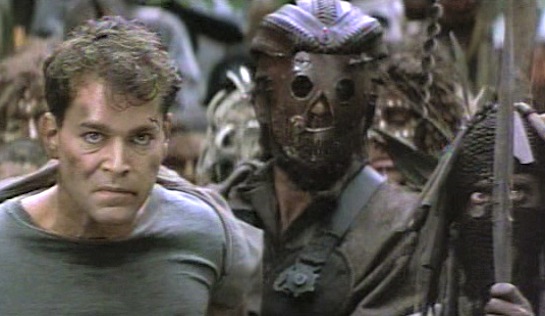 It’s the underpinning socio-ethical positions here that I find even harder to fathom than the whole action-movie-implausibility thing. Which is saying something.

It’s 2022 (now not too far away, by golly), and Capt John T Robbins (Ray Liotta) has graduated to the escape-proof Leviticus Level 6 Maximum Security Penitentiary. We know that he shot his commanding officer in the head and that he has escaped from two Level 5 maximum security prisons. The international prison system has been handed over to private corporations and Level 6 prisons are places from which prisoners are never to be released; they go there to grow old and die. They are the absolute end of the line.

Except that we discover that there is an end of the line beyond the end of the line; somewhere supposedly worse. Robbins refuses to use an electric cattle prod-type implement to ‘whip’ his cellmate, who has been found guilty of retaining a morsel of food, and then disarms the Warden (Michael Lerner) and holds his gun to his head, just to prove the point. Why they don’t execute him then and there is a mystery; instead, he is whisked away from the ultra-secure, high-tech supermax, and dropped onto a remote no-tech island, Absolom.

The island is now inhabited by two discrete tribes of (all male) prisoners, and lots of rats. Robbins is captured by the Outsiders, a group of 600 feral, violent, heavily pierced savages, dressed steampunk-style, and led by the charismatic Walter Marek (Stuart Wilson). After proving his mettle and then disarming and humiliating Marek, Robbins flees… but is wounded in the process and fortuitously lands in the camp of the other group – the Insiders, a 98-strong group who have become peace-loving medieval artisans who have decided to create the best possible life they can to atone for their pasts. The Insiders’ New Age-ish leader is known as ‘The Father’ (Lance Henriksen).

And this is where it gets tricky for me. If countries across the world have no compunction about sending their prisoners away to be confined forever in inhumane, brutal supermax tombs, are they really going to be so squeamish if that contractor were to execute them and save the cost of their lifelong incarceration? Why pay for their upkeep… particularly where, in some cases, contact with the outside world is forbidden so family members would not even know whether their loved ones were dead or alive, and nor would the public?

And the private corporation… Can we believe that it would be brazen enough to dump 700-odd prisoners on an island prison, condemning them to a dog-eat-dog existence where they eat rats and kill each other, but be so worried about public opinion if one were to escape that they monitor activity on the island via spies and satellite… and then bomb them if things look too troublesome? Why not just kill the lot to start with? No escapes, no chance of prisoners spilling the beans, no expenditure on bombs and no adverse public opinion. The contracts are clearly managed very poorly, because none of the countries using the service are aware, presumably, that the prisoners for whom they are paying big money to be managed in a modern high-security prison are left on an island to fend for themselves.  Alternatively, why not put every prisoner on the island and save the expense of Leviticus Level 6?

Now, all those questions are aside from those immediately present themselves when you look at the two populations. The Insiders are very creative and resourceful and use everything that washes up on the shore, but they have glasses, recorded music, a distillery, wool (despite no obvious sheep), a mobile phone that works… and have nice haircuts and most are able to stay close shaven. Just how many disposable razors wash up on island shores annually?

Anyhow, the Outsiders raid the Insiders regularly, and the decorated killing-machine Robbins is called upon to do amazing things to repel them by employing his super slaying skills, derring-do and military strategy. But he is intent on escaping, not staying around to make life more pleasant for the good guys, so that he can get another chance to tell the world why he shot his commanding officer in the head (a small matter of covering up the massacre of 342 women and children in a village, about which he has recurring flashbacks). And, as an afterthought, to tip the bucket on Absolom.

No Escape is of course a piece of nonsense… but thankfully doesn’t pretend to be anything else. Shot in the north Queensland jungle, it looks pretty spectacular and the prisoners’ costumes are joyously extravagant. If you don’t get too tired saying things like,’Why aren’t there any rapes amongst those 700 men?’ or ‘How do those prisoners stay chubby on that diet?’ or ‘Why doesn’t any one of those six rogue Outsiders’ gangs just take over the Insiders camp?’, it can be a diverting piece of nonsense. 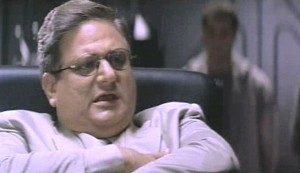 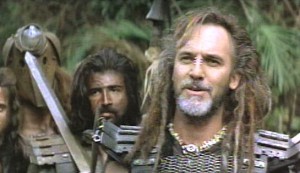 Also known as ‘Escape from Absolom.’