A young kid with a bit of potential but a tough upbringing starts up a criminal gang with three of his mates. Much later, in his late teenage years, he (with another of his gang) is caught red-handed inside a shop they are burgling; he gets two years in prison, plus six cuts with a heavy cane. He survives by reading and writing letters and telling stories. His mate is not so lucky; he is repeatedly raped and becomes a gang leader’s wyfie (woman). After his release the young man’s fortuitous pursuit of a romantic interest narrowly saves him from joining his other three gang members in a criminal exploit that goes horribly wrong. The others nonetheless elect him as the fall guy, but once the trial begins they belatedly, and ruefully, admit that he wasn’t there. They hang. He doesn’t. It’s a story that takes almost 2½ hours to tell.

In the final credits it is noted that the screenwriter, John W Fredericks, who also happens to be the man on whose life the film is based, still types, in his 70s, with one finger. On that basis, you’d think, the screenplay must have taken him a very long time to write. And, on that basis alone, he could have been well advised to find plenty of scenes to cut.

“Watch yourself. You have a calling,” Abraham’s God-fearing mother tells him when he is just a boy. But he gets seduced by the easy money, by the easy access to ganja, by the bond between and the loyalty of his fellow gang members, by the opportunity to break away from a life of poverty, and by the desire to avoid being an easy victim of other gangs. His calling becomes to lead a gang, and the failure of two of his men to sound the alarm leads him to prison.

Upon his arrival there, Abraham Lonzi, or ‘AB’ (played as an adult by Dann-Jaques Mouton) and Richard ‘Gimba’ Carelse (Gantane Kusch), the son of a moderately successful ganja dealer known as ‘Mr C’, are immediately appraised by the Numbers gang – the ruthless South African prison gangs broken into the 28s (generally the ruling party which specialises in rape and sodomy), the 27s (the enforcers and killers) and the 26s (the money makers). There is safety, of sorts, in joining a gang, but an ever-present risk from opposing gang members. There is no safety outside the gangs.

Gums (David Manuel) is the leader of the 28s and the king of the dormitory. He tests out the two newcomers. AB declines to play ball. Gums is not pleased. It beomes a little tense. Gimba is not so strong, and acquiesces, so Gums rapes him, and later tries to rape AB as well, but AB resists his advances, placing himself on even thinner ice. Luckily, AB gets some support from (old) Timer (Peter Butler), one of the 26s, and the 27s; if he tells stories to the satisfaction of the bored group, he might be left alone, and not be required to take a Number. The bored group is surprisingly easily entranced and entertained, and he survives.

Two years on, when AB and Gimba get out, things can’t be the same. They had little to do with each other in prison, and AB remains scornful of Gimba’s weakness and his meek submission as Gums’ wyfie. Gimba is indignant, protesting that he sacrificially allowed himself to be used by Gums solely to protect AB. It is arguably the most interesting moment of the film, but is quickly passed over. Instead, Fredericks prefers that we join with AB as he wrestles with, on one hand, resuming his interrupted criminal career and gang warfare, and on the other, fulfilling his potential and pursuing a relationship with a beautiful friend of his sister’s, Jenny (Tarryn Wyngaard), in defence of whom he had once stabbed a man in the head.

It is ultimately, I think, a disappointing film. Fredericks is at pains to give us a well-rounded picture of his early life and his post-prison grapplings – but, regrettably, he did not strike me as the most interesting or compelling character in the story. That honour, if that’s what it can be called, is Gums, propped up by and the embodiment of the real-life Numbers gang system – an intriguing, unfathomable, fearsome entity backed by a dark and complex tradition. While AB tells his stories in order to survive, that dark beast lurking within the same dormitory is paid almost casual attention; we see its impact on just AB and Gimba, but not on every facet of the other prisoners’ lives as well. Lost promise abounds, and it’s a shame. And maybe a little indulgent.

As the credits start to roll there is, however, one final poignant and sobering moment; the dedication of the film to Fredericks’ son, who was murdered on his father’s birthday in 2012. It doesn’t say why he was murdered, but one is left with the decidedly uneasy feeling that violence, gangs and intergenerational murkiness still reign in his father’s neighbourhood, and in the old man’s law-abiding life. Sad. 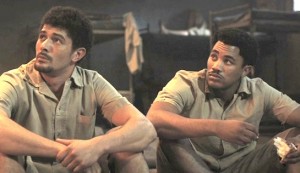 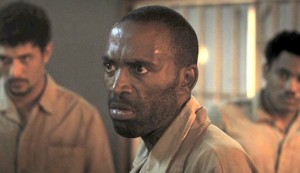 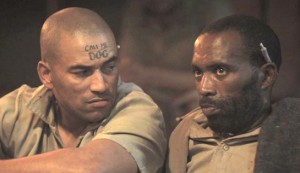 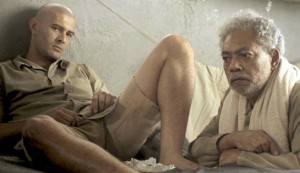 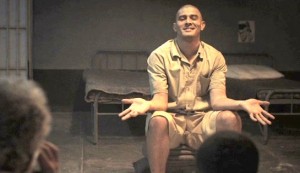 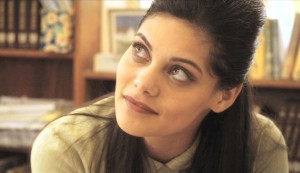 And huge, huge thanks to Tracy and Brenda who hunted this down on safari…