It’s Good Friday as I’m writing this… and pondering, fittingly, the allusion to Barabbas in the title. What can it mean? One thread of the film concerns a man who has mightily affronted the authorities, and whose non-judgmental love for a prostitute has ‘healed’ her. A little familiar, you might think. But there’s no guilty rogue spared here while an innocent man goes to his death; the man awaiting execution is very much guilty (of the premeditated murder of a policeman), and none of those who walk free, or go unpunished, are of Barabbas’s ilk… and nor do they pave the way for the other man’s execution.

Maybe the title has more to do with William Douglas-Home, on whose play the film is based. Douglas-Home (whose brother Alec was later to have a very brief spell as British Prime Minister), had served a 12-month sentence at Wormwood Scrubs and Wakefield Prison for refusing to carry out orders relating to the wartime bombing of the town of Le Havre – on the grounds that the French civilians had not been evacuated and that the bombing was morally indefensible. Just maybe, maybe, he cast himself as the Christ figure – a peacemaker and innocent in a nest of Barabbases.

Leaving the title alone, there are two parallel stories told here: the aforementioned man on death row, waiting to hear of his fate, and the daily tribulations of a group of prisoners in one prison mess. Neither story seems a particularly novel one now, yet the ensemble approach was more common in women’s prison movies, pre-war, and the pairing of the those two plot lines was also less familiar territory.

Dick Tufnell (Richard Greene) is the man who, for most of the film, is waiting to see if his petition for mercy will be upheld. He has been sentenced to hang after tracking down and shooting a policeman who earlier that same night had told his girl, Rosie Sullivan (Betty Ann Davies), to ‘move along’; an instruction to which he took great offence as she was no longer on the game.

Tufnell is an ex-serviceman, good-looking, personable, likeable even, and is under constant watch (to make sure that he stays alive enough to be hanged) by two affable warders, King (Gerald Case) and Jones (Percy Walsh), who keep him distracted by playing checkers and arguing. His spiritual welfare is overseen by the prison chaplain (Stephen Murray), an awkward man who never seems to have an apt response at the ready, and who perpetually gives the sense that he is about to betray his calling (without ever doing so). The padre helpfully tells Tufnell to keep his chin up, rather haltingly assures him of God’s forgiveness, and brings him Alice in Wonderland to read after his petition has been rejected. Yes; decidedly odd.

The other prisoners, who have no contact with the condemned man, are again an odd collection. The mess leader is Patrick (Paddy, naturally) O’Brien (Richard Burton, in one of his early roles, and one that he does with little distinction, wrestling with an uncomfortable Irish accent throughout). O’Brien is a republican serving a 10-year sentence for sabotaging a train; these days he would be labelled a terrorist. Of all the prisoners, he is the angriest, the most judgmental, and the most resentful… and the others don’t appear to resent the nature of his crime.

The others in the mess comprise Len Smith (Harry Fowler), a young conman and forger destined for a long life behind bars; Anderson (Glyn Lawson), a cheerfully resigned West Indian caught red-handed with a large cache of stolen jewels and watches, and sentenced to 5 years on the strength of that small ‘misunderstanding’; Jack Roberts (Ronald Howard), a bank clerk who embezzled funds to buy his girlfriend an engagement ring; Evelyn Richards (Peter Doughty), a gay (one presumes) ballet dancer who did something silly in a fit of jealousy sparked by another dancer; Jim Brown (Leslie Dwyer), a bigamist with nine children to his long-suffering first wife and an enduring interest in his younger, more attractive second; Spencer (Kenneth More), a compulsive shoplifter of women’s items who persists in telling everyone that he is jail for flying his aircraft too low in wartime; and the older Medworth (Julian D’Albie), an abortionist (one can only infer), in prison after one of his patients died (either because of his ineptitude, his drunkenness, or both). How lucky, you might think, that not one of them shares the same offence history as another; that they all have different stories to tell!

The men are kept in line by Warder Jackson (William Hartnell, of later Dr Who fame), a by-the-book disciplinarian, and quite possibly a prototype for Porridge’s Mr Mackay; and Warder King (Gerald Case), a much more relaxed officer (and while not quite as benign as Mr Barraclough, still a useful counterpoint to Jackson’s unbendingness); King is inclined to overlook the prisoners’ minor misdemeanours – more by virtue of his good nature than anything corrupt or a desire to curry favour with the prisoners. Their Governor (Sir Cedric Hardwicke) feels the weight of his responsibilities, particularly with a man languishing in the condemned cell, and is a proper mix of gruffness, experience, cynicism and compassion.

As much as anything, the film reminds us that prisons are about people. It is almost devoid of traditional prison drama, but full of people drama: Smith’s beloved mother dies; Roberts’ fiancée tells him that she is marrying someone else (in a scene that descends into quiet farce as she has to break the news to him on a visit with Jackson, Brown and Brown’s wife #1 and child #9 hanging on to every word); the warders chat about everyday things; and there is a hint that maybe O’Brien’s and Richards’ friendship might be more than that. And while these tend to be serious matters – including, most critically, what will become of Rosie once her lover is gone? – there are two running jokes: Anderson’s bewilderment at the polite British smiles of both his colleagues and his captors, and Brown’s repeated and wholly disingenuous attempts to get the Governor’s permission to write to wife #2.

Most of the relationships have a little complexity; there is tension between O’Brien and Medworth (partly because of the former’s distaste for what the older man represents, and partly because Medworth is an incorrigible squealer), and that weird chemistry between the padre and Tufnell. Even Jackson, who is very much in danger of being a two-dimensional character, steps in to allow Smith to compose himself before joining the others after his mother dies (and then slips him a few cigarettes to boot).

While the action takes place soon after the war, the hostilities serve as neither an excuse for Tufnell’s (or anyone else’s) waywardness, nor have the discipline of war service and the united war effort – fighting for the forces of good – rubbed off on the prisoners or brought about a shift in their moral rectitude. The war is, strangely, both ever-present and a bit of an irrelevance.

If the Barabbas connection is designed to highlight not only people’s frailty but also that they can be forgiven, then that might make some sense. But the chaplain, despite assuring Tufnell that he is forgiven by God, seems to place even greater store by the need for him to remain stoic as he approaches his death – to maintain that stiff upper lip that so amuses Anderson; he exhorts him to be able to tell those mates whom he had served alongside in the war and who had died that, “I could take it, too”… ‘standing up to it’, like they did. Bizarre.

Barabbas is diverting enough and significant in terms of its structure, but in the end it says little other than that prisons are full of people. Fallible ones, who might not be all that different to ourselves. 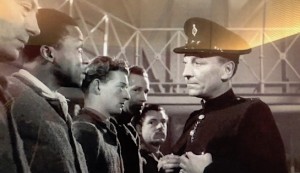 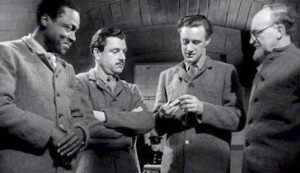 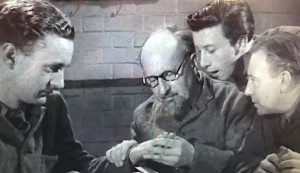 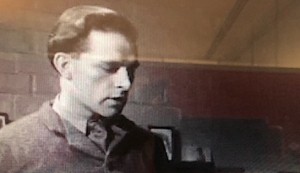 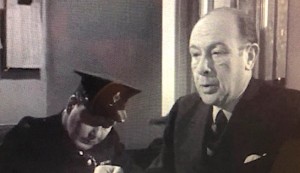 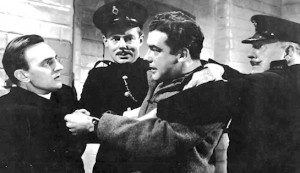 The film has sadly never been released on DVD, but is available through the British Film Institute Player (if you’re in Britain) and able to be viewed at the BFI in London.