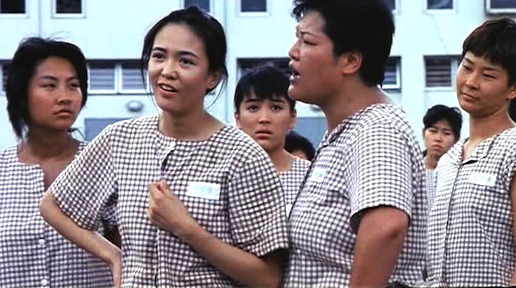 Yes, that’s right; ‘Nu zi jian yu’ becomes ‘Women Prison’… and that sets the standard for the sub-titling throughout. It’s an entertaining prison movie for traditionalists: a fight for top dog, a naïve first-timer, a brutal, corrupt officer, an escape, some sexual assaults, and even a disturbance that requires the use of tear gas. Not unlike the 1987 Hong Kong film about a male prison, Prison on Fire, in some ways.

The unexpected addition to the standard prison story is a 3-year-old boy, Rocky, who was born to his mum in custody and goes everywhere with her. He manages to get involved in most of the fights, is fed chilli and dunked into hot water in attempts to get back at his mother, and even manages to escape. Where is Child Protection in Hong Kong when it’s needed?

It’s a clean, modern prison and its new reception and the film’s heroine is Man-Chik Ha (sadly renamed Kelly for the English speaking audience, Pat Ha) who, on what should have been her wedding day, throws a small statue or two at a loan shark’s heavy who’d come to recover some money owed by her fiancé, and hits him nastily on the scone. She cops 18 months, and does all the things one shouldn’t do as a prisoner: she doesn’t kowtow to the staff, she tells the truth about what she saw in a fight, and she stands up to the prison’s ‘Big Sister’. Liu Fan or Fatty (Fun Ho), the Big Sister, is all that a nasty top dog should be: a bit solid (obviously), menacing, and in cahoots with the corrupt physical education instructor who oddly seems to have a licence to roam around the prison and hit Fatty’s enemies with a baton, which never leaves her hand.

Yu-Ling Cheng or Lynn (Carol ‘Do-Do’ Cheng) ) is Fatty’s rival. She used to be top dog, but was briefly out of prison and in her absence Fatty has risen like, well, fat, to the top. There are lots of fights, one in which Kelly inflicts some odd facial cuts on Fatty’s face, which strangely never heal and earn their owner the alternative nickname of ‘Scarface’. It all comes down to a bloody showdown in the barricaded mess hall with Lynn and Fatty toe-to-toe, Kelly going into labour prematurely after copping a whack to the stomach (oh, yes, she found out she was pregnant, too), little Rocky being knocked out, and the baton-wielding PE instructor taken hostage as the women demand to be freed from their living hell.

The stand they take is all worth it in the end; the corrupt regime is brought to a close (mind you, there have been much more corrupt and vicious ones), and a kindly new PE instructor, decked out in pastel colours, sweeps into the mess hall looking very much like a bandleader with her new baton. And that nice Lynn is reinstalled as Big Sister. Thankfully, calm has been restored to Women Prison. 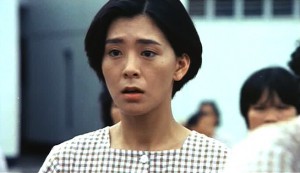 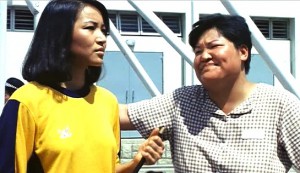