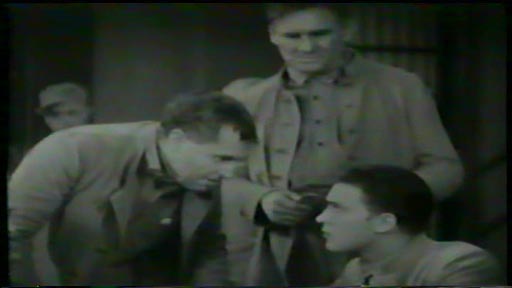 While The Big House (1930) is generally credited with being the grand-daddy of the prison movie genre, the corny Numbered Men – released in the same year – is very forgettable. And a bit confused.

You’d think that a film with that title might explore the theme of imprisonment reducing individuals to just numbers. Indeed, the opening credits refuse even to give the names of the key characters, referring only to their prison numbers (which aren’t used at all once the movie gets under way). And then there is this extraordinarily bombastic introduction: “In God’s glorious sunshine, everyone and everything bears a name. It is man’s birthright – yet behind pitiless walls, built with bricks of shame, there exist humans – with names long forgotten – now known only by numbers.”

It’s at that point that they must have fired the first screenwriter, and we move instead into a love story and a bit of a dalliance with the ‘honor system.’ And if they didn’t fire the set builder too, they should have, because all of the prison scenes look like they have come straight from a movie lot.

Forger Bertie ‘Duke’ Gray (Conrad Nagle) and the younger (and innocent) Bud Leonard (Raymond Hackett) are trusted prisoners in the Stoneyhurst State Penitentiary. They are allowed to access the ‘Good Conduct Room’, where things are very cosy and relaxed and there are inspirational signs on the walls, saying things like ‘Do Good.’ All in all, it’s a pretty jolly group full of decent chaps – even the big, illiterate Pole called Baby Face whose wife is desperately ill and who might go off the deep end at any minute.

But then they are joined by tough-guy ‘King’ Callahan (Ralph Ince). Most of the men in the Good Conduct club are permitted to work outside on the road camp, under little supervision and, a little strangely, with unrestricted access to dynamite. Not Callahan, though. To get away from the ‘crummy joint’ he’s forced to instigate a riot as a diversion and escape with Baby Face in the middle of the disturbance. The warden grave-facedly tells the honor men that they will have to be sent back inside. Smooth Bertie suggests that instead all the honor system boys could all help find the rascal. The warden agrees and immediately installs all the prisoners as his deputies and issues them with guns!

Now, in a house not far from there, Bud’s girl Mary Dane (Bernice Claire), has started work. Mary loves Bud but is having doubts about waiting for him for 10 years. She’s visited by Lou Rinaldo (Maurice Black) who framed Bud with some counterfeiting plates (in order to have a better shot at gaining Mary’s affections), put Callahan into the cops and is continuing to use Bertie’s plates. He’s still in love with Mary. She’s not interested. Meanwhile, Bud has been able to sneak away from the road gang to spend some time with her. She implores him to escape. He refuses. “The Warden trusts us,” he says. She begs him not to go back to the prison. No, he says, honorably. “These are my friends. If I break one of the rules, they’ll suffer.” She locks him in a room. That looks less of a good idea once Callahan breaks in and menaces her. He has already disposed of Baby Face and now he turns his attention to Mary… and then to Lou, who makes an ill-timed return.

Luckily the armed honor system boys arrive not long after. Bertie confronts Lou and Lou confesses that he framed Bud. Callahan shoots Lou. Bertie shoots Callahan. The warden arrives. Lou is dead and no longer able to exonerate Bud. Bertie claims responsibility for the plates planted on his young mate, giving himself another 10 years in the can and Bud and Mary a life together. Very heartwarming.

And hardly a number to be seen.