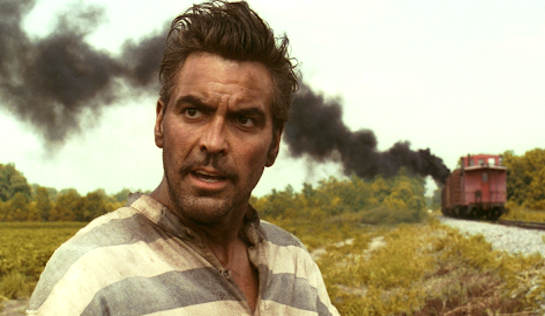 I remember watching this years ago and struggling to stay awake. On watching it again, it became evident very early that my sleepiness wasn’t the film’s fault.

O Brother is, sadly, not a prison movie: it features prison escapees, and a few scenes of the chain gang from which they escape, but almost no prison. Prisoners on the run is another movie category altogether.

The film is set in 1937 and is loosely based on Homer’s Odyssey, we’re told, although I know as much about Odysseus as I do about George Clooney’s other film roles. Clooney here plays Ulysses Everett McGill, the smartest of three Mississippi prisoners who, still chained together, somehow manage to run across a field without being noticed by the road gang’s armed guards… having convinced the not-so-smart men chained to him, Pete Hogwallop (John Turturro) and Delmar O’Donnell (Tim Blake Nelson) that the proceeds of a $1.2 million heist, hidden in a soon-to-be-flooded valley, await them.

They have adventures on the run. In the Depression-hit south they encounter larger-than-life characters such as bipolar bank robber George ‘Baby Face’ Nelson (Michael Badalucco), rogue Bible salesman Big Dan Teague (John Goodman), and an electorally on-the-nose Governor Pappy O’Daniel (Charles Durning). Plus sirens, a flock of baptismal Christians, a Ku Klux Klan rally about to lynch a young black guitarist of their acquaintance, and Everett’s ex-wife, their six (or seven) daughters and her new fiancé.

It’s a wild ride, full of humour, narrow escapes and the most wonderful Americana folk music, some of which comes as a result of them teaming up as the Soggy Bottom Boys.

O Brother features more escapees chained together than The Defiant Ones (1958), and The Walls of Abashiri Prison (1965), and quite a few fewer than Take the Money and Run (1969). And it’s arguably the pick of them. 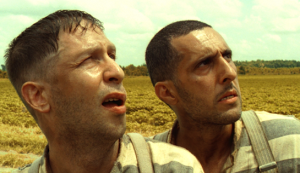 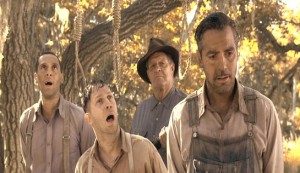