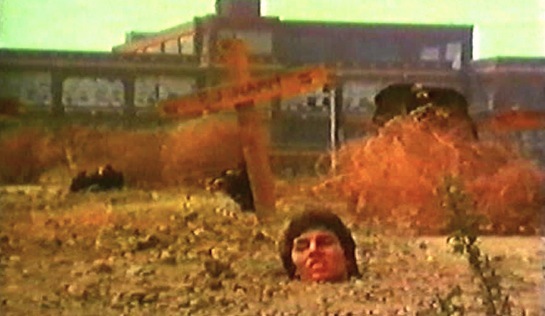 I think I made a mistake in reading Roger Ebert’s review of this film (which is also known as ‘Snake Canyon Prison‘), before I watched it. As a result I was expecting something truly execrable – but it turned out to be merely unfunny, in the manner of most prison comedies.

Rich kid Randy Whitby (Patrick Cassidy) and Latino Rico Santiago (Billy Hufsey) find themselves hitchhiking together in Tennessee. They get picked up by Pam (Rosanna Arquette), get drunk and are pretty much out to it when Pam is detected speeding and is pursued in a wild chase by the Police. When she crashes the car she runs off, leaving the two young men to be found intoxicated in a car that (a) is not theirs and (b) has just been driven very recklessly. They go to court and are sentenced to 6 months without being given the chance to protest their innocence. And so to jail.

A comedy is ordinarily (and fairly) judged by its comedic moments.  These are arguably the most significant of Off the Wall’s moments. You be the judge:

It’s pretty much Laurel and Hardy-type stuff 40 years on, and none the better for being 40 years on. 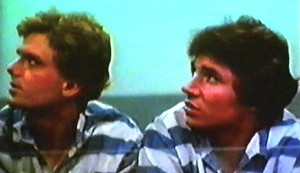 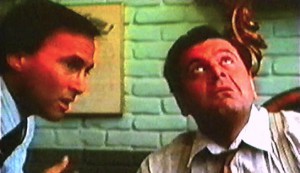