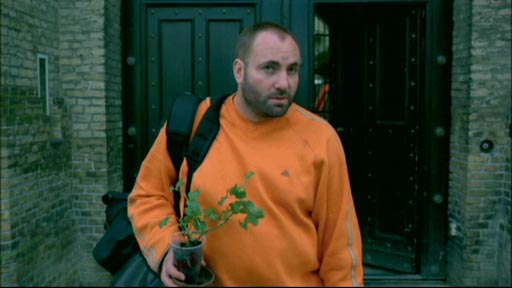 I foolishly bought this Danish black comedy thinking it was a bit of a prison movie. It’s not, but it does boast one of the more inventive (and funny) movie escape scenes. Of a Danish man from a Swedish prison.

Harald (Kim Bodnia) is released from prison in Denmark, but it’s not a joyful time. A carload of gangsters menace him for money he owes, his ex-partners-in-crime disappointingly want to concentrate on pastry-making and going straight, and the aging crime boss who was like a father to him is dying of a liver complaint.

Munken (Jens Okking), on his near-death bed, asks Harald to bring his son Ludvig to see him. Harald didn’t even know he had a son. The next problem is, Ludvig is in a maximum-security prison in Sweden. And he’s a tiny bit of a psychopath, having killed five women.

Harald and his pastry-chef-mates devise a plan to spring Ludvig, which relies upon a bungee-type rope being fired into the prison’s exercise yard from a nearby motorway. Harald somehow is allowed through to the exercise yard where Ludvig is… well, taking his exercise. They have time only to introduce themselves when the rope is shot into the yard. With Harald, Ludvig (with prison dog attached to his groin), and a prison guard all hanging on, the rope flings them all out of the yard and launches the Danes back to Munken’s sick bed.

It’s high farce; there are robberies, more unfortunate accidents between Ludvig and women he encounters, car chases, the sort of gun battles where thousands of rounds are fired but none cause any damage, the planned pursuit of a liver transplant in Ecuador… and Ludvig falling for a hostage – the only woman, seemingly, he hasn’t wanted to kill. Yet.

It’s good fun (and very black), but a prison movie it ain’t. 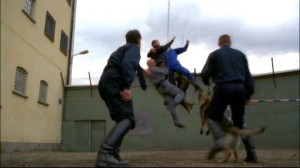 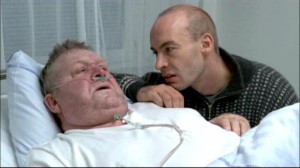