Ozzy isn’t quite the new Toy Story 3 (2010); it lacks much of the cleverness and multi-dimensional appeal of the earlier animated feature. But as another heart-warming movie about discarded anthropomorphic beings longing to be reunited with their families, it happily shares something of the same vibe.

Ozzy (voiced by Benjamin Nathan-Serio) is a beagle, loved by his family, the Martins. Sadly, when the family wins a trip to Japan for three weeks, they have to find somewhere for him to stay. They stumble across an ad for ‘Blue Creek’ – an expensive resort-style dog hotel – and on visiting are soon won over by its overt pampering, its dog spas and dog chefs. But as soon as the humans leave, all the resort-style features are dismantled and the dogs are taken away in a prison van to a spartan dog prison, which looks exactly like a maximum-security prison for humans, except that the guards are all Great Danes and Warden Grunt is a St Bernard.

Just about every imaginable prison movie reference is crammed into Ozzy’s story. He shares a cell with a talkative dachshund, Fronky (also voiced by Nathan-Serio) who makes regular, failed attempts at escaping; he has mess-hall battles, creates havoc in the frisbee-making factory, and runs foul of Vito, the prison’s top dog (who of course has to be a chihuahua). And he gets himself in an awful bind when he is pressured by Vito to be his runner in a traditional foot race against the top staff runner, and pressured by the Warden to run (and lose).

There are plenty of affectionate nods to old prison movies – including Cool Hand Luke (a punishment of having to repeatedly dig up and bury a bone), The Last Castle, The Shawshank Redemption, and Escape from Alcatraz. As it dawns on Ozzy that the Martins have seemingly not come back to collect him, he plots an escape, borrowing from [insert your own escape movie reference here] and dragging his mates Fronky, Chester (a disabled wire-haired terrier) and Doc (an Old English Sheepdog who doesn’t speak) along for the ride.

As you’d want a children’s movie to be, Ozzy has charm and cuteness and heart. It’s let down by some poor voice casting (perhaps on the alternative Spanish soundtrack the tough guards sound more like vicious Great Danes than Afghan Hounds, but not in the English version) and some lapses in annoying adult logic (why, for example, illegally recruit a dog workforce for your factory by first enticing them into a resort hotel – for which you get paid for a few weeks but nothing after the families return to be told that their dogs have died… when you could simply lure or kidnap strays and have no-one look for them and no fancy resort overheads to fund?).

I don’t think Ozzy offers up any particular insights into prison life. It’s not complex and it’s not incisive… unless you choose to see its main message as the morality of cost-cutting, profit-motivated, prisoner-exploiting, greedy privatised prisons, or a discourse on slavery (which would be a very long bow indeed), rather than a simple story of a cute pup in a bad place seeking to be reunited with those who love him. It is comfortably familiar and ends happily. Nice. 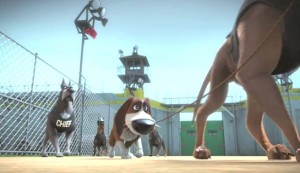 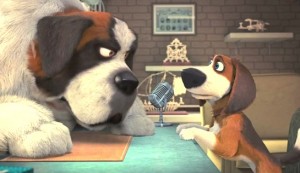 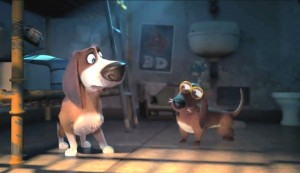 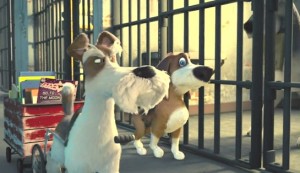 Thanks to Mel and Alannah for fetching Ozzy for me.