Charlie Hunnam takes over the McQueen role of Charrière – a charismatic safecracker and thief who is framed for the murder of a pimp after his girlfriend is spotted with a necklace, part of the proceeds of a job he’d just done (the entirety of which he should have passed on to his crime syndicate). He is found guilty despite a rock solid alibi, handed a life sentence and sent to the French penal colony in 1930s French Guiana.

On the boat over, he makes the acquaintance of Louis Dega (Rami Malek replacing Hoffman), a counterfeiter hoping for a successful appeal and with a veritable ATM of banknotes stuffed into his rectum. Charrière (or ‘Papillon’ – or Papi for short – as he is universally known, because of the butterfly tattoo on his chest) grabs the opportunity to offer Dega protection in return for Dega bankrolling an escape bid on which Papi is intent. Dega is soft and a bit pouty, and vulnerable to all sorts of extortion attempts, but at first he politely and self-assuredly declines Papillon’s offer. Then, when the man next to him on the boat gets killed, his belly ripped open for the money he has swallowed, he politely reconsiders his position and accepts.

The prison conditions are no picnic, but seem tolerable enough by harsh penal colony standards (the authorities even provide hats for the prisoners to protect them from the sun). Tolerable, that is, unless you try to escape, for which one is guaranteed two years in solitary; a further escape bid will lead to five years in a cell, on your own, in silence. The guillotine awaits not anybody whom the Warden dislikes, as you might expect, but only those persons found to have committed murder.

Papi manages to win a first period in solitary at Saint-Joseph Island after he makes an impromptu run for it; what else can you sensibly do after hitting a guard on the head with a rock to stop him whipping your friend who has become tired after carrying the body of another colleague who has literally lost his head? As a sign of gratitude, friend #1 Dega manages to have half a coconut slipped into his food each day, but when it is discovered, Papi is placed on half rations and in perpetual darkness for refusing to reveal who arranged it. Not that it would be so hard to work it out, you might think.

When Papi gets out of solitary, Dega is in the privileged position of Warden Barrot’s book-keeper. Though he cannot yet be restored to full fitness, Papi jumps with relish into the next escape bid which Dega has been busy orchestrating. The two old friends are joined by ex-Navy man Celier (Roland Møller; and who for some reason is known neither as ‘Ancre’ nor ‘Hirondelle’ despite having tattoos of an anchor on his chest and a swallow on his neck), and Maturette (Joel Basman; no discernible tattoos at all)… and three of them make it to Colombia where they cavort with peace-loving topless natives and are lectured by nuns who are fortunately not topless, before being surprised and taken back into custody. For Papillon, that means five years in solitary; for Dega, Devil’s Island.

Of course, they meet up again.

Papillon’s is an amazing story; less so if none of it is true. Just as amazing is that Dega manages to hold onto his glasses for all that time. I do think that this film is less wearisome than the McQueen-Hoffman 1973 ‘classic’ (maybe it was the dreariness of that earlier film’s 151 minutes that convinced director Michael Noer that a remake was worth doing)… and it’s nice to see an escape or two which don’t rely on the prisoner being able to decrypt the prison’s security system or overcome twenty-three armed guards with his bare hands. 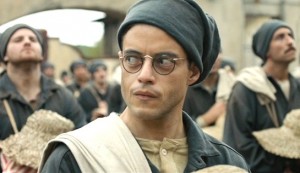 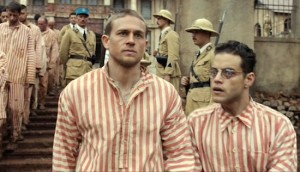 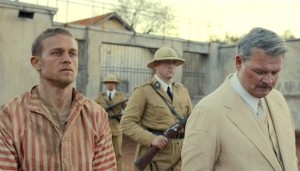 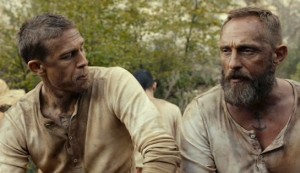 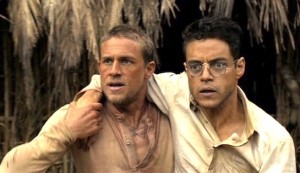 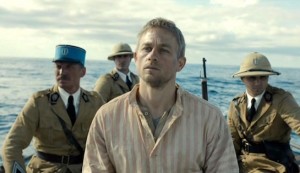