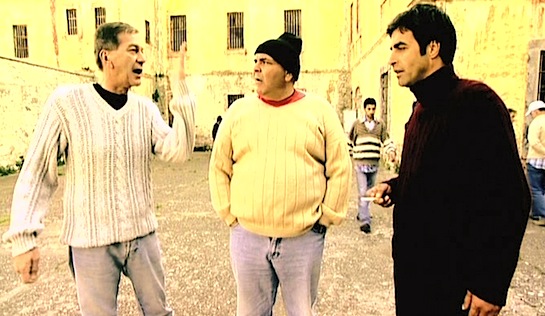 It’s been said before that the idea of being thrown into a Turkish prison is so much more evocative than being banged up any other country’s prisons. But just as a foreigner, perhaps, and maybe ignoring a lot of other serious and exotic contenders. Pardon, a farce said to be based on a true story, shows a different sort of terrible experience in a Turkish prison for three locals.

Writer Ferhan Sensoy, comfortably into his 50s, flatters himself by writing himself into the role of a much-younger man, ?brahim. A gambler, ?brahim claims to be in the army, but has worked in his father’s shop and avoided compulsory military service for 16 years. His dodgy brother-in-law and the father of a beautiful young woman, Asuman, whom he is pursuing but who has better, younger prospects, see him as a nuisance and troublemaker and conspire to tip off police to get him out of the way. ?brahim is duly picked up and interrogated by the police on charges ranging from armed robbery to throwing molotov cocktails into a busy restaurant.

Threatened with torture, ?brahim quickly signs a false confession to all the alleged crimes, as does his friend Muzaffer, or Muzo (Rasim Öztekin), whose house he had been visiting. They are accused of being part of a terrorist organisation and are pressured to reveal the identity of the third man who joined them in their crime spree. Why ?brahim doesn’t name his brother-in-law, whom he loathes and has previously stabbed, is hard to fathom. Instead, he gives the police the name of Aydin Diktepe (Ali Çatalbas), another friend, who is a little braver than the others and subjects himself to torture before also confessing under that duress to the crimes, despite not even being in the same city when one was committed. Aydin shows remarkable equanimity when reunited with his two friends who have dragged him into the whole affair.

They go to prison (played capably by the historic Sinop Fortress Prison, which closed in 1997) and go back and forth to court, each time expecting justice to prevail and an acquittal… before being sentenced to a whopping 24 years. By the time the real culprits are arrested and the trio is exonerated, they have served 6 years in prison and their lives have been ruined.

It doesn’t sound like the subject for a gentle comedy, but that’s what it is. It takes large swipes at the Turkish criminal justice system, and pokes fun at the prison – run by an ineffectual director who is interested only in the prison garden while sections of his prison refuse to allow guards to count them, prisoners go on hunger strikes en masse, and four escape and the media know about it before the prison does. The three ‘terrorists’ are kept by themselves in the children’s ward (without the children), their every move overseen by a dentally-challenged guard, Osman (Parkan Özturan), who takes a healthy cut from the money they give him for cigarettes and other luxuries, and is immensely excited with a blow-up doll they purchase.

It is a very cloistered existence that these three men lead; while there are other prisoners in the yard with them, not one is given a speaking part in the whole movie, and (other than a ridiculously-moustachioed guard upon their arrival) Osman is essentially the only guard who speaks to them. Despite the insurrections in the other wards, the prison appears extraordinarily calm; there is considerably more drama outside the prison with the unscrupulous brother-in-law taking advantage of ?brahim’s elderly parents. That is, until the surprise ending, which in some respects makes the film.

Of the political satires I’ve seen, this is one of the gentlest. And tamest. Possibly for good reasons. 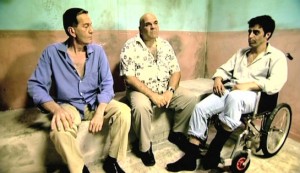 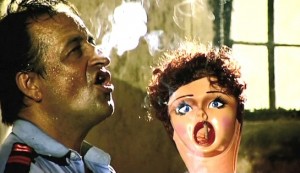 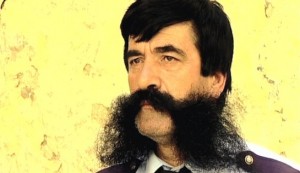 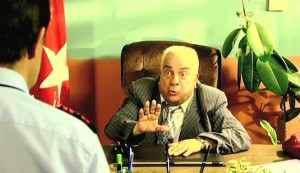