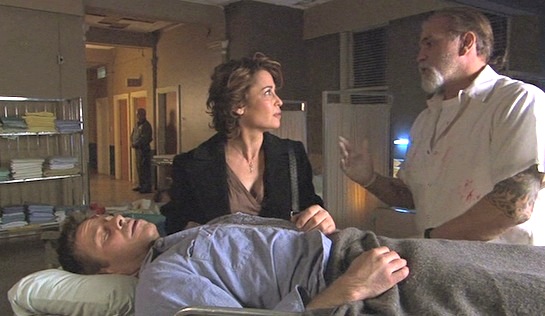 I found this really, really hard to watch… partly because of my strange aversion to watching random (i.e. not all) films about hybristophilia: sexual arousal and pleasure derived from having a sexual partner who is known to have ‘committed an outrage or crime, such as rape, murder, or armed robbery.’ To be frank, I don’t even know if this does involve hybristophilia (the hybristophile candidate here does rather enjoy the danger of the workplace, but doesn’t seem to be sexually attracted to more than one outrage committer), but I learned the term through watching this movie and I felt compelled to use it. Frequently.

In relation to an earlier movie, Captives (1994), in which a female dentist similarly embarks on a love affair with a prisoner, I said about my discomfort: “Every Prison Officer’s instinct screams (a) “Don’t do it!” and (b) “That wouldn’t happen!” – but of course (a) she does, and (b) it does.” And it’s the same here, with a hardworking and capable prison psychologist falling for a murderer – and she, too, has little or no intention of listening to the “Don’t do it!” screams, from within or without.

But it’s not just the hybristophilia thing that troubles me in this movie. The problems for me start very early in the piece when the psychologist, Janet Tarr (Julie Warner), is interviewing a sex offender. Warden Lloyd Mayfield (Garry Chalk) rudely beckons her from outside the interview room. She interrupts her interview midstream, closes up her notes and files… and then trustingly leaves them in the room with Raoul, the prisoner, while she steps outside. Hmm. Mayfield wants not much more than a chat. “My guess is that he’d rape again within 48 hours,” ventures Janet of Raoul, bravely adding a high degree of specificity to her risk assessment. 72? No, 48. And not so trusting, it seems.

The Warden is keen to refer a new case to Janet: Robert Moss (Sebastian Spence), a smooth, goodish-looking prisoner convicted of a murder in the context of an armed robbery where he didn’t fire the gun. He’s done 16 years and is facing a parole hearing. Janet, whose husband has traded her in for a newer model, sees him and is immediately smitten. She bypasses security protocols and gives him a Christmas gift, for which jealous other prisoners beat him up. She assesses him of being low risk, administers a polygraph test to him (!), advocates for him, shares a bed with him when he gets released, finds a job for him… and then is thrown into turmoil when she suspects that he has committed another murder. Oh dear. I’ve risked all this for a psychopath. End of story.

But back to the things that annoyed me. How’s this from Warden Mayfield, speaking to Janet, her clinical supervisor, and a chaplain: “You worry about saving souls, Father; I’ll worry about recidivism.” Then, moments later, when Janet says she thinks she can help Robert: “It’s not my job to help ’em. You get too humane here, they call you soft on crime.” Apart from the sympathy that should be extended to Chalk for having to say those inane lines, how exactly does the Warden mean to deal with recidivism if not by helping prisoners? Other than punishing them until they stop re-offending, of course, or having sex with each one of them until they desist through enervation.

Janet’s lines are no better. “People talk. I could lose my job,” she says reprovingly to Robert after he has been released, urging greater discretion in their relationship. You don’t think, Janet, that openly giving him sneakers as a Christmas present when he’s in prison, or rushing to his bedside in prison at night when he was beaten up, or pulling the curtains around him so that you could have some privacy when he was in the prison hospital, or following him into the library where he works in the prison, or meeting him at the gate and driving him in your own car away upon his release… You don’t think that they could have aroused suspicions and placed your job at risk? Not a weeny bit?

I do struggle with some of these hybristophilia movies, but I struggle more more with the asinine things scriptwriters guess prison staff might say or think or do. This is forgettable stuff. 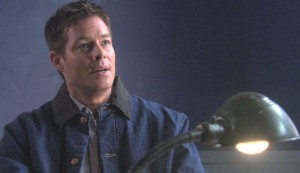 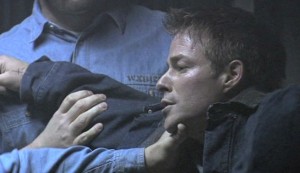 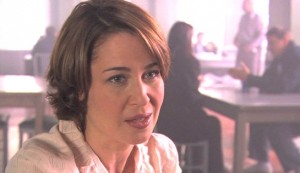 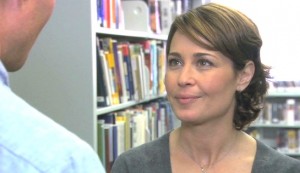