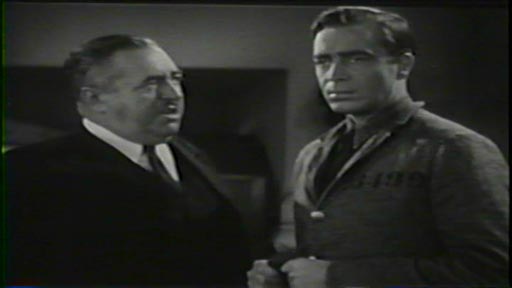 This remake of The Criminal Code (1931) and precursor to Convicted (1950) is a solid story, well told… notwithstanding that if John Howard’s performance as the young prisoner William Jordan were any more wooden, it would be a tree.

Jordan is 21 when he hits a bloke over the head with a bottle in a nightclub. The other man, who had been pestering Jordan’s floozie, dies. The District Attorney, Tom Mathews (an excellent Walter Connolly) can see that he’s a decent kid, and is sympathetic to him. Privately, he even talks of how he would defend him. Publicly, he offers a plea on manslaughter, which Jordan takes and cops 1 to 10.

Six years on and Mathews misses out on the Governor’s post and instead is made Warden at the penitentiary. The cons don’t like it, many having been sent down by him, and start yammering en masse. Nice welcome. Mathews walks out into the yard, unguarded, and confronts the lot. The yammering subsides.  Mathews is both tough and compassionate.

Jordan, on the other hand, is intense, struggling, and desperately looking for a way out (“if I could just get a breath of fresh air outside… if I could just see a woman’s face…”) when he learns that his mother has died. He almost loses it. Mathews remembers him and throws him a lifeline; he gives him the job of his driver, the major function of which seems to be driving his daughter, Elizabeth (Jean Parker), wherever she needs to go. Jordan falls for her in an awkward, upright, handsome sort of way. Lucky for him that the first woman’s face he saw and fell for wasn’t that of Mathews’ spinsterish sister.

Jordan’s cellmate Finch is planning to do a bunk. He asks Jordan if he wants to be in on it; Jordan declines – he is too much in love. The escape bid goes badly. One of the team rats on the others; Finch is killed and his mate is recaptured. The stoolie, Runch, is given clerical duties around the Warden’s office until he can be safely relocated. Jordan’s other cellmate, Jack Hawkins, who has been working as a butler in the Warden’s house, manages to sneak into the office and kill Runch while both Mathews and Jordan are out of the office.

Mathews returns to find Runch dead. He doesn’t believe Jordan killed him, but demands to know who did. Jordan respects the criminal code, and refuses to say… even though he has parole papers authorising his release in a few days’ time. The whole of the film has been working towards this point; Mathews pulling out everything to get Jordan to give up the name of the murderer, and Jordan having to choose where his loyalties lie and whether he’s prepared to lose his job and do extra years in jail in order to protect a fellow con. The code prevails.

Ultimately his staunchness is rewarded. An unlucky break saw him go to jail; now a lucky break sees him out of it. The other prisoners know that he’s been sent to the dungeon and hasn’t coughed up the name of Runch’s killer; they smuggle a knife in with his bread and water. Hawkins, too, doesn’t want the murder pinned wrongly on his young mate, and engineers his own placement down in the dungeon – where he starts taking guards out with a firearm that materialises out of nowhere. Trapped, he surrenders his gun to Mathews and the Captain of the Yard, Grady, but then takes Grady hostage with the smuggled knife, confesses to the killing of Runch, and is promptly shot dead.

Jordan is exonerated and free to go to parole. Extraordinarily, his feelings for Elizabeth are reciprocated, and even more extraordinarily, her father doesn’t intervene to prevent their union. Oh, happy day!

Some of the interaction between the prisoners in their cell is as good as you’ll see anywhere, and the power of criminal code is brought out in a dramatic, but understated way; there are no histrionics from Jordan – just a quiet but firm resolve not to break the code, even where it is very much against his own interests to do so. 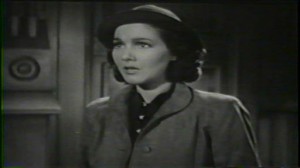 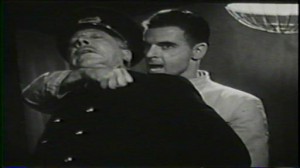