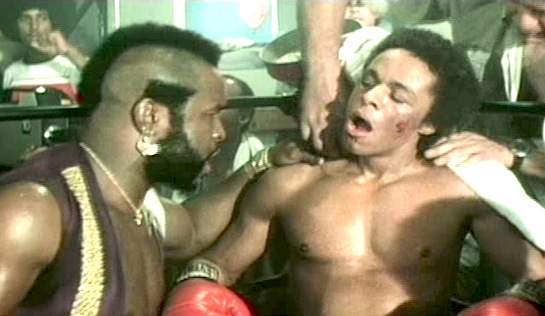 I know that it must have been really tempting to cash in on the success of Penitentiary (1979), but I’m still not sure what possessed Jamaa Fanaka to make this ludicrous sequel.

Penitentiary II is an extra disappointment for prison movie fans in that – despite a title that firmly hints at some jail action – the only bits of prison we see is when they stage two fights (including a world championship bout, no less!) in the State Penitentiary, the current place of residence of boxer Jesse ‘The Bull’ Amos (Donovan Womack), and the former abode of his three-time opponent, Martell ‘Too Sweet’ Gordone (Leon Isaac Kennedy).

We pick up Too Sweet from where the first film finished. He’s out of jail, living with his attorney sister and her family, and indentured to the boxing promoter brother-in-law of the prison warden.

His parole officer warns him that ‘Half Dead’ Johnson (Ernie Hudson, this time around), a vicious killer, has escaped from court at an appeal hearing and is on the loose. Half Dead harbours a strangely obsessive desire to kill Too Sweet, a result of the latter resisting his sexual advances when they shared a cell together.

It’s soon confirmed that Half Dead is not a nice man. He breaks into Too Sweet’s sister’s home and rapes and murders Too Sweet’s too-sweet, virginal girlfriend Clarisse – before Too Sweet manages somehow to overpower him. Too Sweet, a very reluctant fighter up to Clarisse’s death, suddenly decides to put the gloves back on and become world champion. Either that, or he has seen Mr T (played by Mr T) hanging around the gym, and wants him as his trainer. Who wouldn’t?

Too Sweet’s first fight doesn’t go all that well – The Bull knocks him out – but he wins plaudits for his pluckiness; like Cool Hand Luke, he keeps getting up off the canvas.

Meanwhile, Half Dead is sprung from hospital, where he is under Police guard, and – rather than go underground, which is a too-predictable strategy to avoid recapture – openly seeks out Too Sweet again. When the improving Too Sweet is given a shot at the world championship (coincidentally, a rematch against The Bull, which Too Sweet insists should be held back inside the prison), Half Dead – keen to fix the outcome for betting purposes and fix Too Sweet for personal reasons – forms a cunning plan.

He is now, of course, on the run twice over, having escaped custody from the court and then again at the hospital. He nonetheless decides to go back into the prison, where the fight is being held (security checks were seemingly a bit lax that night), dressed in a multi-coloured clown’s wig (perhaps a bit of the reverse-psychology thing designed to avoid attracting attention). He surprises Too Sweet, who has been left on his own, and beats him up – choking and kicking him, stomping on his left hand… and telling him that if he wins, his sister’s family will be killed by the goons who have broken into her house.

Injured and a little distracted, Too Sweet isn’t at his best when the fight starts. In fact, he doesn’t throw a punch for the first few rounds – a hard way to win a title fight. He is knocked down many times but again keeps getting back up. Pluckiness must be a family thing, though, because his sister and her husband manage to overpower the two armed goons who have been steadily drinking themselves into a stupor, and then drive to the prison and still get there in time for sis to have a quick ringside word with Too Sweet. When he sees that she’s OK, Too Sweet, despite being dazed and having the staggers, turns the fight around using just one hand… and WINS! And Mr T hunts down Half Dead and gives him a bit of a tidy up as well.

And the prison? Prisoners (including the obligatory bevy of transgender persons) provide some ringside colour, and short-statured prisoner (Joe Anthony Cox) manages to convince one of the female fight-goers to relieve the sexual tension that has been building in him over his 13 years inside. That’s it.

It is a very ordinary film; low-budget, poorly acted, notable only for its sheer silliness. I can’t see myself hurrying to get a copy of Penitentiary III. 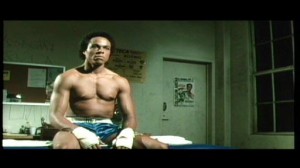 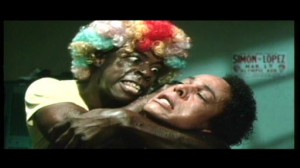