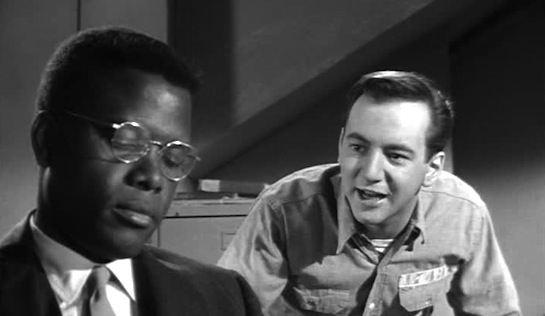 If, like me, you love every one of those people the police wish to interview on Law & Order who find something with which to busy themselves (rather than just sit) while being asked questions by detectives, you’ll love the psychiatrist (Sidney Poitier) in this movie. The Poitier character clearly went to the same school as the Law & Order people, but took Distracted Filing During Psychiatric Consultations 101 instead of Preoccupied Activity During Questioning about a Homicide 101.

Poitier’s African-American psychiatrist starts off trying to convince a younger, white psychiatrist (Peter Falk) to stay with a hateful black client, with whom he is making little progress, by recounting his own story of being in a similar position with a white Nazi sympathiser in a federal penitentiary in 1942.

The prisoner (singer Bobby Darin) is 29 and has been sentenced to three years for sedition. It’s not surprising that the Nazi isn’t popular with his patriotic fellow prisoners at a time when the country is at war with Germany. It’s a little more surprising that all of the medical team (other than the Poitier character) are ultimately happy to support his release on parole – into a community that might be a bit wary of people who seek to undermine the USA government and the war effort.

Darin’s prisoner is brash, superior and offensive. The psychiatrist, despite his abhorrence of all that his new patient stands for, works with him and diagnoses what has been eating at him and has been affecting his sleep. Far from being grateful, the prisoner remains unrepentantly bigoted, and manages to get under the psychiatrist’s skin. He manages to sow a seed that has the psychiatrist question – despite his academic and professional qualifications – whether anyone truly values his achievements, whether he has made any progress, or is fighting a losing battle. Whether, no matter what they do, people of colour will always be treated as inferior… And he manages to leave the psychiatrist doubting whether his assessment of the Nazi as a dangerous sociopath is truly objective and unbiased in the face of his white colleagues all falling for the prisoner’s schtick and supporting his release.

It’s quite an intelligent little movie, without that meaning to sound condescending. Darin is surprisingly and disturbingly good (at least for someone who knew him solely from Splish Splash, Mack the Knife et al), and the issues (though more pertinent in the 1960s) still resonate. Poitier is… Poitier. But while virtually the whole film takes place in a prison, it’s hardly a prison movie – it’s more of a psychiatrist movie. Or a file-shuffling movie. 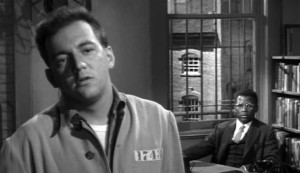 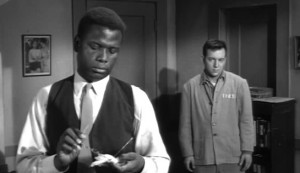