“I don’t want to get to be you and stagnate and finish here… I don’t want to grow old living in here,” says prison novice Martine Fresienne (Martine Brochard) to her cellmates. What her pronouncement lacks in diplomacy, it makes up for in wackiness.

Martine is a refined young Frenchwoman, on holiday in Rome. She and a friend are exploring the Circus Maximus ruins when she encounters some drug-using hippies in a small grotto. As she moves to attend to one of them who seems to be very unwell, the police burst in and attempt to arrest the lot. Another young woman slips a small packet of drugs into Martine’s overcoat pocket before fleeing. Even the bloke apparently on death’s door manages to elude the police, but not Martine. The drugs are found on her when she is later interrogated. She says nothing, really, in her defence, (other than to protest that she’s innocent), and extraordinarily doesn’t ever call upon her friend to testify on her behalf. She is remanded into custody awaiting trial.

In prison, she is the proverbial fish out of water. Her cellmates all have tough working class stories to tell, and the most outspoken of them, Susan (Marilù Tolo), is feisty, a little aggressive, and has a decent chip on her shoulder. She doesn’t make her prim and proper cellmate particularly welcome.

Martine doesn’t help her own case much, either. She has an innately superior attitude and soon accuses the women of having ‘given up’, and of failing to better themselves and learn from their mistakes while in prison. Despairing, she fears being trapped, like her cellmates, unable to ever fight her way out of jail… not quite appreciating that with a piddling charge and all her other advantages in life, a long career in prison is never really on the cards. Her cellmates take her tirade more generously than they might have.

They are housed in an unusual prison. I had the impression that the religious administration of women’s prisons in Italy didn’t survive much into the 20th Century, so it came as a surprise to see this one run by a small number of matrons (or capostanze) and a bevy of nuns, led by a sour, judgmental Mother Superior (Maria Quasimodo Cumani). That alone makes this prison unusualish. The nuns are assigned all the important jobs, like supervising the showers to ensure that there is no touching. Their moral guidance, however, does not seem to have paid off; all the evidence suggests that this particular jail is one where the women routinely forget to wear underwear and only the more attractive, more shapely women are allowed to shower.

Is it otherwise a harsh prison? Grazia (Katia Kristine), another cellmate, is caught smoking in mass and is sent to solitary, where she is stripped (yes, it’s that sort of film), re-dressed and then strapped to a table. I guess that’s harsh. But it is the death of a woman, seemingly through inattention from the nuns after she experienced complications following an abortion, that provides the spark for the riot of the title.

It’s not the biggest riot you will ever see, but matrons are overpowered, one young nun is stripped by the prisoners in retaliation for overly zealous shower supervision (yes, it’s that sort of film), and a fire is set in the office, destroying lots of official paperwork, quite possibly undispatched orders for more underwear. The riot police put the riot down with some enthusiastic baton work. There are casualties. When the dust settles the women are sent to another prison, where they demonstrate their anger (or Martine demonstrates that she’s just as capable of abject behaviour as her colleagues) by senselessly killing the warden’s much-loved dog.

Then, out of the blue, it is determined not to prosecute Martine on her ‘detention and use of drug’ charges on the basis that she didn’t commit the crime – which doesn’t make complete sense in light of the available evidence – and she is released. A wiser person, perhaps, for her ordeal.

Look: some might enjoy gratuitous nudity and implausible stories of a prison neophyte and an undressed cloistress. Me? I’m having nun of it. 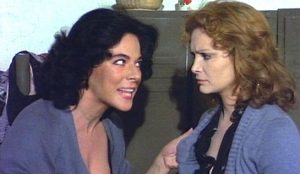 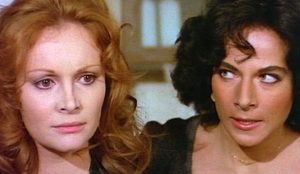 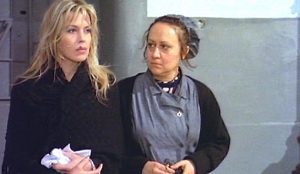 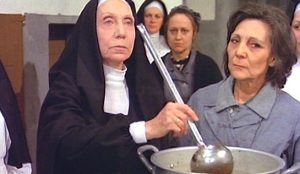 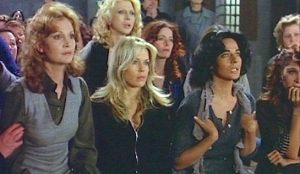 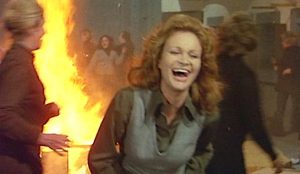 Also known, amongst other things, as Sex Life in a Women’s Prison.