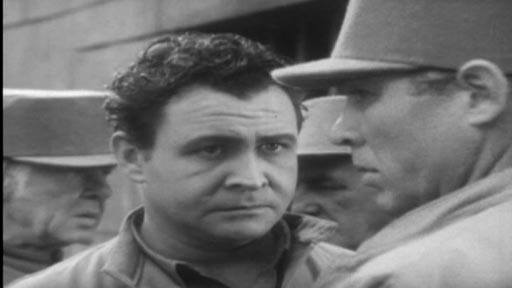 I wonder if audiences in 1938 felt at all cheated, expecting to see a dramatic prison break and getting nothing of the sort. Well, that’s not entirely true; we do see an attempted escape, which our hero thwarts, and we learn much later that there has been a successful break. But those incidents are far from the main game. Perhaps Break is used here in the sense of an ‘interruption’ to or a ‘brief rest’ from civilian life.

Barton MacLane* plays Joachin (pronounced Wah-keen) Shannon, a tuna boat skipper. He’s sweet on Jean (Glenda Farrell), who has a young son from an earlier marriage, but Jean’s family is for some reason dead against him. Joachin’s sister is about to marry his mate, Chris. Chris has a big buck’s night. Jean’s brother Joe turns up and warns Joachin off her, so Joachin punches Joe’s mate. Chris gets blotto, and is put outside to get some fresh air but wanders away, and Joachin later finds him non compos mentis and guiltily just next to Joe who has been belted over the head. When the Police arrive, Joachin has the motive and is the obvious suspect… and claims responsibility for the assault, wishing to spare Chris any strife on the day before his wedding. Joe does his best to spoil the relationship by dying the next day, and Joachin has to excuse himself from the wedding reception to be charged with manslaughter.

He goes down but expects to be out in a year with good behaviour, and Jean promises to wait for him. But he finds good behaviour ain’t easy in the hoose-gow. Another prisoner, Big Red Kincaid (Ward Bond), returns to the prison, and he’s clearly the top dog. He hears that Joachin doesn’t want to take part in a sit-down strike he’s organising because he wants to keep his record clean. Red ain’t takin’ that from no fish. Joachin is moved to belt him and cops a week in solitary and a blot on his record. When he gets out of solitary, Red sets him up for some more time in the punishment cells and Joachin belts him again. Two blots. Of course, his hot-temperedness is seen to be very much like his earlier criminal activity, and he misses out on parole. He is told he has to serve another 4 years. Luckily, 12 months on Red tries to pull off a daring escape with a couple of smuggled guns, using Joachin and his wise old cellmate, Cappy, as human shields. Cappy does the heroic thing, gets shot and killed, and Joachin holds Red and his crew at bay long enough to win an immediate parole from a grateful warden.

But that’s where the real story starts. Jean’s dad gets Joachin sacked from his first job, and then he can’t find another, being a parolee. He picks up a job on a boat bound for South America but is told he can’t leave California under his parole conditions. Other firms won’t employ parolees. And he can’t wed Jean until his parole is finished. He’s trapped, and all over something that he didn’t even do. Jean supports him but his pride is wounded; he needs to be working.

He gets so frustrated he moves to a new town to find work, bravely not telling Jean until he’s gone. He can’t attend his appointments with his parole officer and is duly breached. He knocks back an offer from Soapy, an ex-con he’d met in the nick, to take a boat to South America (on the grounds that it is clearly a bit dodgy), but after he assaults the officer who tries to take him back to jail on his parole violation, he decides that a boat trip looks like a reasonable option after all. He arranges to meet Jean just before the boat sails, and she’s still on board when Soapy arrives with Red, who has escaped from the prison, killed a guard in the process, and done a hold-up en route to the boat. He forces Joachin at gunpoint to set sail, with Jean not allowed to leave. It’s not explained why Soapy would be so keen for Joachin to take charge of the boat given the known bad blood between Joachin and Red. Maybe there was an acute shortage of persons on the waterfront willing to do anything underhand…

Anyway, Soapy has been shot by Police fleeing from the hold-up and dies, but not before telling Jean that it was Red who was the mysterious man who had killed her brother. Red suddenly becomes the source of every one of Joachin’s troubles. With new motivation Joachin soon disarms and overpowers Redand secures him, confident that on delivering the murdering escapee to the authorities all his own misdemeanours will be forgiven, and he can have a happy future with Jean (and that child that she had just left to fend for himself at home). Love conquers all.

It’s a slightly melodramatic tale of circumstances continually conspiring against poor Joachin. Mind you, for the nice bloke he is, he has an awful temper and keeps belting blokes a touch pre-emptively, and makes some other very poor choices. The moral of the story is around how difficult it is for men in prison and on parole to do the right thing. It’s an insight that moves Joachin to observe at one point that he now knows why men come out of prison worse than how they went in. For their short prison breaks. 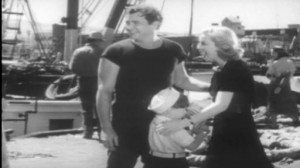 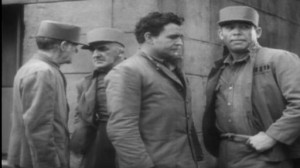 Incidentally, the blurb on my DVD copy reads: “Barton MacLane stars as a tuna fisherman who has been wrongfully convicted of a murder he did not commit. His exemplary behaviour in prison ensures that he is up for early parole. He realizes, however, that his movements will be limited, and he will be unable to join and wed his beloved. The only solution is to escape and hunt down the real killer himself.” 2/10.