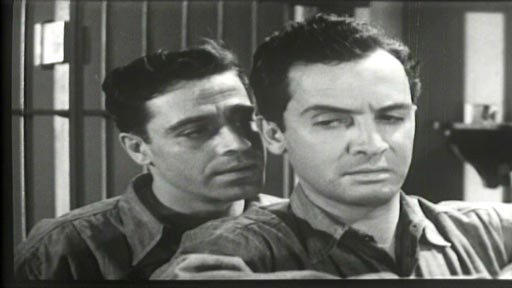 Also known as ‘You Can’t Beat the Law‘. This is the point at which the treatment of prison reform issues in movies starts to get a bit out of hand. So progressive is the new reformist Warden in this flick that he makes a job offer to an exonerated prisoner even before he’s been released. Prisoner one day, prison guard the next. You may not be able to beat the law, but this shows you can certainly defeat prison logic.

Johnny Gray (Edward Norris) is a bit of a playboy. Driving home one night he becomes the victim of a carjacking, his car commandeered by four bank robbers whose getaway car had broken down. The leader of the gang runs off with the money, and Johnny and the three others are apprehended by the Police. The other gang members insist in court that Johnny was their leader, not wanting to initiate a hunt for the missing fourth man known to have been involved in the robbery. Johnny is convicted and cops 5 to 10.

In jail he’s thrown in with a hard man, Cain – against the recommendation of an earnest young guard, Frank Sanders (Milburn Stone). Cain is plotting an escape, and he thinks that Johnny is on the level because he seems to hate everyone – the system that saw him framed, the guards, and especially his three ‘co-offenders’, whom he tries to assault at every opportunity.

Then the world turns. The old Warden gets the boot, and the Governor bravely but recklessly installs Sanders as the new Warden, notwithstranding public opinion that the prison system should move back to traditional values rather than experiment with the newfangled humane treatment ideas that Sanders is interested in. And Johnny is given a gardening job which brings him into contact with Amy Duncan (Joan Woodbury), a guard’s daughter who had a crush on Johnny at college.

Johnny’s co-accused then make a daring escape bid orchestrated by their boss who had avoided capture. They get gunned down at the fence, and one of them uses his last words to confess that Johnny had been framed. That’s sufficient to see Johnny immediately pardoned. Notwithstanding his time served as a prisoner (and not even a well-behaved one) and a close associate of Cain’s, Sanders offers him a guard’s position. He thinks that Johnny is the man to win the support of influential prisoners like Cain for the physical fitness program he wants to run. Johnny declines to walk out into the waiting arms of his fiancée (who hadn’t really helped him at his trial, it must be said), preferring instead to swap uniforms.

His overseeing of the fitness program is an unqualified success, but one night, when he is doing general guard’s duties, Cain tells him of his imminent escape plans. Johnny tells him he’s staying straight. Cain whacks him over the head through his cell bars, steals Johnny’s keys and lets all the prisoners in the block out of their cells. When Johnny comes to, he finds that he and Amy’s father are two-out amongst a riotous mob of prisoners.

It’s a test of everyone’s mettle. The Governor tells Sanders, who rejects the offer of guardsmen to break up the disturbance, that he can do it his way but that he expects his resignation if it fails. Johnny, who is a bit under suspicion of being in cahoots with his old cellmate, Cain, has to demonstrate that he’s now on the guards’ side. He gets whacked a few more times, but is immovable. He doesn’t want Sanders to negotiate his release and let the prisoners on the loose.

Eventually, Johnny’s heroism and Sanders’ persuasive and decent approach prevail; the prisoners return to their cells and Cain is humiliated and overpowered. This allows Johnny and Amy to make up for lost time, and all is good in the world. Except for that WWII thing.

I guess it was wartime and manpower was short. And I’m reminded of a prison officer veteran observing long after his 42-year career had ended that he had encountered many men (on both sides) who were in the wrong uniform. But even he would have balked at the idea of one man wearing both uniforms on the one day, and the guard’s one second. 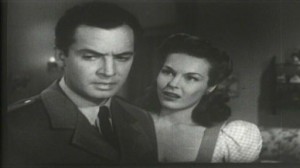 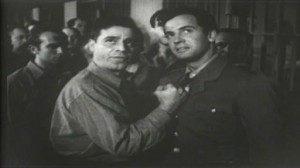