A short film (for some reason edited down to just 50-odd minutes), but definitely one of the oddest. You’d expect a ‘30s film called Prison Nurse to glorify selfless, self-sacrificing nurses in the way that Mutiny in the Big House (1939) deified prison chaplains. At least, I did. But this movie is of a very different flavour.

Three dedicated nurses are conscripted to work in a flood-ravaged, typhoid-stricken prison. Straight away they get stuck into administering vaccines to the hundreds of prisoners, reusing a single needle. Ah, nostalgia! Not long afterwards the only doctor succumbs to typhoid himself, but who should step up to save the day but Dr Dale (Henry Wilcoxin), a handsome, urbane prisoner who used to be a doctor but who has carried a big chip on his shoulder since his incarceration and has hitherto refused to help out, despite the pleas of the warden and the overworked doc. That is, he refused to help out until one of the pretty, suddenly-smitten nurses reignites his will to be of use to others.

He immediately becomes Super-Doc, even after being taken hostage in an armed escape in which a guard is killed. When the getaway vehicle crashes, he helps free and then treat his captor and instigator of the escape, Gaffney – but all the people who could attest to his forced involvement in the escape plot die, one by one, leaving him with a murder rap and placing his blossoming romance with the nurse under great pressure. We already know that Gaffney is really bad because he contemptuously spits (kind of dribbles) on himself when given up over an earlier escape plot, in which he’d planned to use hidden explosives. And now the whole world’s opinion has the handsome Dr Dale linked with this evil dribbler!

But that’s where Judy, Prison Nurse (Marian Marsh) comes in: she’s not about to stop believing in her man and, pouncing on a chance remark, she delightedly leads the authorities to the one piece of evidence that can exonerate him.

There are lots of unexplained bits. We never learn why the debonair Dr Dale is in prison. Or how Gaffney got 50 sticks of dynamite into the prison. Or why he would need 50. Or why the warden doesn’t seem to frown on one of his new nurses fraternising with one of his prisoners, and – what’s more – why he gives them some private time in his office at a time when Dale was still accused of both murdering one of his guards and escaping. It could be that all the explanatory linking bits were edited out; leaving the film much sillier than it was in its original form. Whatever the case, the film probably didn’t greatly advance the cause of women working in male prisons. 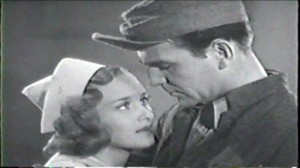