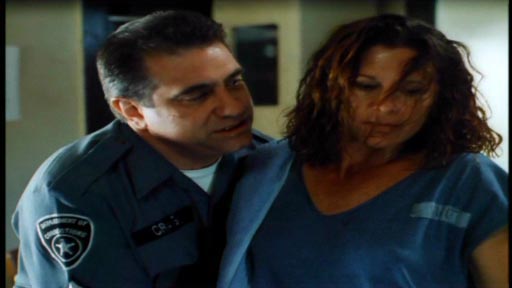 This is supposed to be inspired by actual events, but it’s not clear which actual events provided that inspiration. Methinks there’s a liberal dose of artistic licence being splashed about.

The actual events kick off with one of those mind-numbing depictions of an excruciatingly happy family about to be thrown into turmoil. Lynn Schaffer (Stephanie Zimbalist) is gutsy, middle class, and a wonderful wife and mother. What else would she be? Just once it would be nice to have one of these people who is about to fall from a great height shown scolding their kids unreasonably, or kicking the cat. At least we know one fault: she’s stubborn. She goes against legal advice and chooses not to accept a plea bargain which would have seen her fined, and instead goes to trial and cops a 10 year whack. This seems a wee bit excessive; she entrepreneurially cut out the middle man in awarding building contracts, skimming off $20,000 for herself but saving her boss money in the process. She thinks she has done nothing wrong, and enters jail with a sense of injustice.

Of course once she’s in jail it’s all horrible. She has to mix with drug users and prostitutes, and she doesn’t know the rules. The guards grope her. Her daughter has to fend off taunts about her mother being in prison. Women are taken out of the dormitory in the middle of the night to provide sexual favours for the guards in return for drugs and other benefits. And some of the women are taken out of the prison each night to work as prostitutes, with the guards pimping for them. You know, all the stuff that you see in Women-in-Prison exploitation movies, although this purports to be true. And all the women are either too comfortable (happily exchanging sex for drugs) or too frightened to complain.

The monster behind all of this is Sergeant Ed Crang (Dan Lauria), a man so confident of his untouchability that he brazenly places his hands on Lynn’s breasts during a post-visit pat-down search – in full view of her husband. Yeah, sure. He’s backed by some equally corrupt staff, with only one of them – Officer Sheila Beamer – objecting the abuses of power.

It’s one of those curious prisons where the same nasty staff seem to be on duty from morning to night. They’re there to intimidate and demean the women during the day, and are still there to have sex with the women well after lights out. The women themselves have one of those odd work rosters, where they work in the kitchen one day and in the garden the next. And the Warden is unusual, too; he isn’t in on the corruption of his staff, but his only response to the many complaints about Sgt Crang and his men is to get Sgt Crang to investigate them.

Lynn is a outraged by the treatment of the women, and uncomprehending of their passivity. She starts collecting evidence on all the abuses. It’s a courageous one-woman campaign. At great personal risk she is able to get enough evidence together to get it to her husband (who conveniently is a radio broadcaster and so can make these allegations public), and finally (and very dramatically, with the assistance of the decent Officer Beamer) to a visiting Senator who is troubled enough by the allegations to attend the prison in person. You might guess the rest.

One hopes that the real events which provided the inspiration weren’t quite so bad. 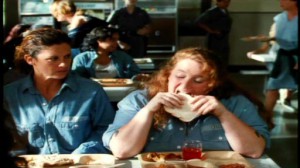 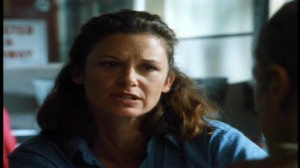