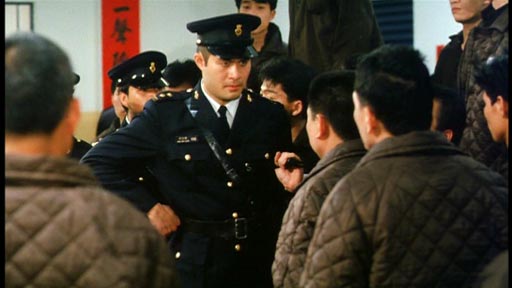 I’m afraid I don’t really get the Hong Kong film genre.  This sequel to the wholly dramatic Prison on Fire again stars Chow Yum Fat as Ching, although this is the engaging Ching, not ‘Mad Dog’ Ching of the last part of the first movie (even in the fight scenes), and is a curious blend of drama, farce, comedy, whimsy, fighting, unintentional humour and even a song or two thrown in for good measure.

Set in the middle of simmering tensions between the mainland triads and the ‘Hongkies’, Ching is opposed to (or by) the mainlanders and the new head of security, Zau, who breaks prisoners’ legs and does all the sorts of things one expects from a villainous security chief.  When Zau refuses to grant Ching leave to attend both his mother’s funeral (unless he gives up his mates) and his son’s orphanage concert, Ching escapes.  He gets to see his son, but is soon recaptured.  He then assists a rival triad boss, Lung, to escape after Lung is framed for a prison murder, and then escapes again himself rather than be set up and placed in a dorm full of mainlanders.  From here it’s high farce, with Ching being tracked by helicopter and scores of guards, teaming up with Lung, whom he meets on the run entirely by chance, both men literally escaping from the clutches of their astonishingly unarmed pursuers (on foot and so successfully that hundreds of guards simply evaporate) and the chase would appear to be abandoned to allow the two men to skinny dip in an idyllic river setting. Well, other stuff happens, they’re caught before Ching can escape to the mainland with his son, and life in prison goes on much as it did before (although Lung manages to call off his men).

It’s all a bit too bizarre for me.