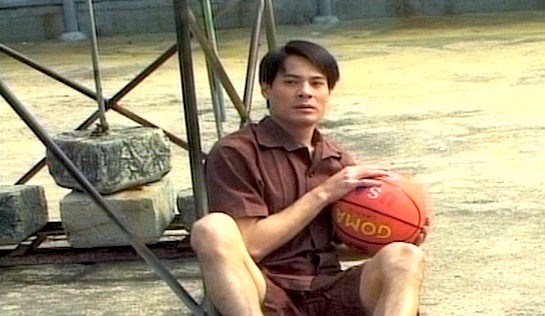 This is a tricky movie. You might be forgiven for thinking it’s a solid prison movie by its title, but more than three-quarters of it comprises flashbacks about the path to prison of one man. It is marketed as a triad movie. Now, I’m not an authority on triads, but the bad guys seem more garden-variety street hoodlum than triad. And to make things really tricky, scenes run non-sequentially, so when the man whom we understand to be a novice prisoner observes that he’ll be OK because he’s been in prison before, it doesn’t make much sense. These are not good trickinesses.

Life Sentence has absolutely no connection with the iconic early Hong Kong ‘on Fire’ movies – Prison on Fire (1987) and Prison on Fire 2 (1990). It tells the miserable tale of young, good-looking Ho Shun Tung (Ben Wong), and resolutely resists all temptation to make it less miserable by fabricating a happy ending.

Tung and his family (his father, mother and younger sister) move to a new area, where they have bought their first house and a ‘fast-food restaurant’ (a convenience store that makes snacks). Tung works hard, but he is soon confronted by three minor gangsters, led by Shing (Lung Bill), who demand protection money. Tung is furious; his father pays up, not wishing to cause trouble.

The bulk of the action is thereafter devoted to Shing’s gang’s taunting and terrorising of Tung and his hapless family. They rob the store, then, on another occasion, smash it up. They assault Tung but, fearing what awaits him, he baulks at identifying his assailant in a police lineup. The toughs hassle his school-age sister, Snow, on her way home at night. They lie in wait for, and then menace his girlfriend Sua (Iris Wong) with a knife, also on her way home. Tung’s constantly appeasing father attempts to broker a truce; he offers to buy Shing’s entire gang a meal to put an end to the harassment. Shing agrees. But while everyone is at the restaurant, Shing goes to Tung’s home and rapes Sau… and then coolly joins Tung at the restaurant, an hour or so late.

When he finds out, Tung pursues Shing and stabs him, but doesn’t kill him. He is sent to Pik Uk Correctional Institution. While in jail, he learns that Sau has left the country. He gets out after two years but finds it hard to get a job with a criminal record. He broods and seethes. Sau’s mother won’t tell him where she has gone, but then he chances upon her – and finds that she caught AIDS from a cut received in defending herself against Shing. She doesn’t want anything to do with Tung. When Tung next sees Shing, he stabs him again, this time fatally.

He gets a life sentence. His father dies. The house and business are lost. If only his mother and sister could have died in a tragic bus accident on their way to visit him; that would have made his misery complete.

Other than in the visit centre, where there are outpourings of grief, the prison scenes are essentially treated comically, with the prison top dog, Crazy Bill (Tommy Wong), dumbstruck by Tung’s failure to acknowledge his status and constantly admonishing one of his henchmen (usually for prematurely wanting to assault Tung for insolence). Tung is past all caring; he has nothing to live for and bashes his head against a pole in the exercise yard to excise his pain.

This light-heartedness with which the film’s brief prison scenes are treated provides an unexpected perspective on prisons; they are portrayed as orderly and benign – as opposed to the nasty, vicious, unpredictable nature of life outside. In Pik Uk we see the guards stepping in to exercise control where necessary; in the world outside, the thugs seem to rule, unchecked, and the police appear unable to stop them. In prison, even the toughest guys show humour and a sense of propriety; there is nothing to match the unrelenting malevolence of the street gangster, preying upon decent, hardworking folk. It’s an unusual, and perhaps worrying, view.

Fortunately, the film leaves us not just with tricks and conundrums, but a moral. The prison social worker, a young woman in a prison uniform, has some very helpful advice for the distraught Tung, whose whole world has collapsed: “Not all the people are your enemies in this world. Although you are a murderer, you have a kind heart… Blaming yourself can’t solve anything. What is the target in our life? The target is to enjoy life happily.” Yeah. Thanks.