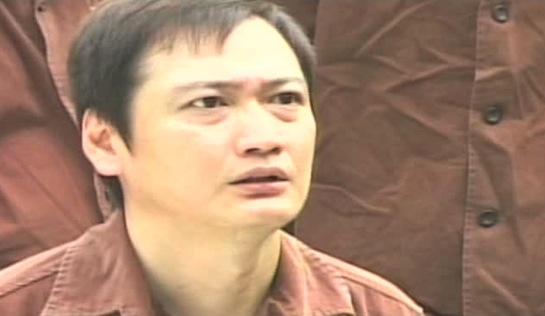 Cheng Shing Fung (Michael Tiu Dai-Yue) is a local gangster with a pretty wife and a young son. He gets in a fight with a rival gang he believes is encroaching on his territory, and is arrested mid-melee when he rebukes one of the fighters for endangering a pregnant woman bystander. He feels aggrieved that he was arrested while doing good (with a cleaver in his hand and one or two dead on the ground); the court is unmoved and sentences him to death, which is later commuted to life imprisonment.

Fung is a fairly unlikeable character both in and outside prison. His mother has a fall and later dies, his wife, Yee (Joyce Tang Lai-Ming) leaves him (and their son) and goes to Canada, and his son Chi Wai grows up to be a younger version of himself… and none of these events inspire much sympathy for him or make you like him any more.

But in the fifteen or so years it takes for Chi Wai to grow up, Fung renounces all that he previously held important. He is guided first by a kindly guard, ‘Uncle’ Kuen (Lee Siu-Kei), and then by a Christian priest, Fr Law (Joe Junior). His mother’s death is the catalyst for much of the change, particularly after Fr Law intercedes on his behalf and he gets granted permission to pray at her grave. By the end of the movie he is giving reformist talks to young prisoners (Chi Wai amongst them, who gets three years for killing a former drug client who was attacking him), and deputising at the pulpit for Fr Law.

It is close to the least powerful story of transformation and redemption that you could possibly imagine. The production is cheap and nasty. Not even the odd diversion created by two of Fung’s cellmates, Bulldog and Silly, can lift the tedium. Steer clear of it.