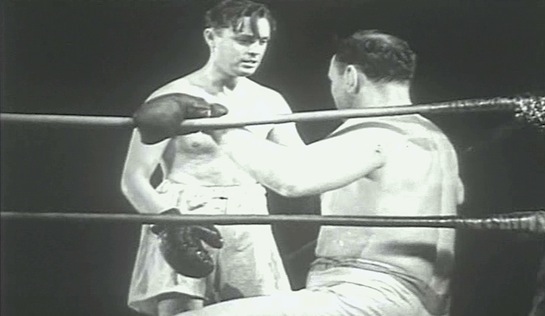 I avoided this film for years, supposing that it had too little prison in it. And I was right to do so. Notwithstanding any inferences you might draw from the film’s title, the prison scenes are all over six minutes into the movie (of which fight scenes account for two, and a vaguely – and presumably unintentionally – homoerotic scene involving a boxer, his trainer and some rubbing alcohol in their cell account for another three).

Gene ‘Kid’ Harris (Eddie Nugent) is the boxer. He is due to be released on the following day, on parole, after serving 3 years for manslaughter. He’s not bitter, although he’s entitled to be; the victim was a fellow boxer, ‘Rough House’ Sweeny, who rushed at him after the bell, and Gene punched him in self-defence – after which Sweeny died. File under ‘Pineapple, rough end of the’. His cellmate and trainer, Dave Moran (Sid Saylor), is due to be paroled a week later.

Gene is nothing if not undeterred by bad portents. His girl, Claire Thomas (Lucille Lund), has rarely been in touch with him while he’s been locked up – indeed, we know that she has been making whoopee with Gene’s manager, George Miller (Forrest Taylor) in his absence – and she doesn’t even bother to turn up to meet him when he is released. Yet Gene remains smitten. The person who does turn up to meet him at the jail gate is Mary Comstock (Joan Barclay) from Miller’s office who is very much in love with him… but he doesn’t notice. She brings his beloved dog, Babe, with her – so we know that she is kind and thoughtful (although a little dishonest, as she told her boss she needed time off to visit her sick grandma).

Nor is Gene deterred by ill fortune. Despite killing a man, and being reluctant to use his big right hand lest he kills another, he is adamant that he wants to continue his boxing career. And despite Gene’s protestations, Miller seeks to take commercial advantage of that unfortunate event, having him newly billed as Gene ‘Killer’ Harris and scheduling his next fight at ‘the scene of the crime’. Even when, at that next fight, his wobbly opponent ‘Dynamite’ Murphy also collapses and dies, causing another police investigation (“… knowing you had a deadly right you should have given up fighting” the police tell him, helpfully) and the possibility of his parole being cancelled, Gene never considers abandoning his chosen career. He is nonetheless a little troubled by killing yet another opponent, for which he receives not a great deal of sympathy from his beloved Claire: “Oh come on, Gene, snap out of it!” she barks at him just hours later.

But then the pooch Babe dies of poisoning that very same evening after grabbing a towel from a locker in Dynamite’s change room, and that starts Gene’s team a-thinkin’. Claire somehow convinces Miller that Dynamite’s second, Bert McNamee (Monte Blue), would be a useful addition to Gene’s corner in his next fight against ‘Kayo’ Reilly. It’s not just that we have watched Bert rub Dynamite down with a mysterious potion from out of that same locker that worries us… it’s why would Miller be in any hurry to augment his team with a second who has just been a central part of two losing fights? Will Gene also get the ‘special’ rubdown?

In front of a packed Madison Square Garden fight crowd, with Bert in his corner, it is Gene who this time gets knocked out… and the doctor duly pronounces him dead. Claire and Bert (with whom she is also making whoopee, it seems, and who are both unaware that Dave and Gene have had Bert’s mysterious potion substituted by a harmless mixture) are left alone with the dead body in the change room. No sooner does Bert say to Claire, “Say, it took longer to put that guy out than it did Sweeny and Murphy put together” than Gene miraculously becomes undead and coppers come through doors and out of lockers to arrest the pair. ‘Huge betting ring uncovered’ scream the newspaper headlines.

Claire and Bert are charged with the two murders. Gene, the big dill, is pardoned (sorry about those three years inside, Gene!), and free to marry Mary, whose faithfulness and love are finally requited. And the Reilly-Harris fight is officially declared a ‘no contest’ (which presumably does little to appease the cheated paying public). But hooray, anyway!

It’s a neat little tale, but ludicrous, of course. The pug Gene firstly has the looks of a man who has never taken a punch to the face, which might, I suppose, simply attest to his skill in avoiding being hit. But in the fight scenes he doesn’t look remotely like a fighter, and even the thought of taking a dive in front of a huge, paying crowd, just hoping to catch someone out, should be enough to have him banned from the sweet science for life. And might not Claire and Bert be pushing their luck just a tad by hoping to avoid arousing suspicion while engineering the result of three successive fights that Gene has been involved in by having one of the boxers die? Hats off to Gene, nonetheless, for killing people each time he steps into the ring and yet refusing to consider hanging up his gloves. 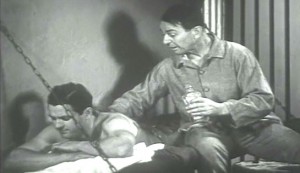 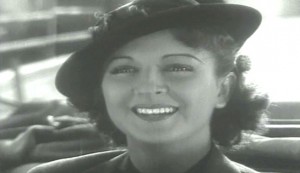 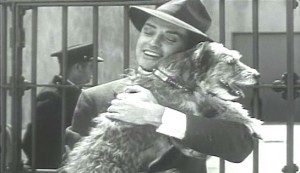 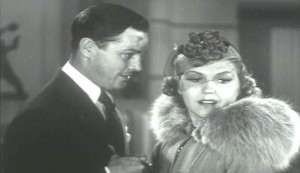