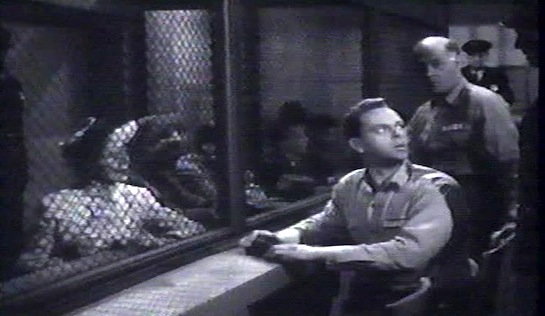 There are quite a number of films where romance blossoms between the warden’s wife or daughter and the suave or good-looking prisoner who happens to be working around the warden’s home as a manservant or chauffeur. This is a very distinctive variation on that theme.

Victor Burnell (Warner Baxter) is the State Director of Public Health. He’s not a young man (Baxter was 60 when the film came out), but he has recently taken a young wife, Elisa (Anna Lee, at 36), and is about to embark on a 6-month post-retirement honeymoon. The Governor, however, has other ideas for him; he wants him to take over as Warden at the State Penitentiary.

The new Mrs Burnell very much hopes he will, too. Some time earlier, while in love with Albert Gardner (Harlan Warde), a young man from her home town of Merlino, she had applied to work in Burnell’s office so that he might fall in love with her. The plan was that if Burnell accepted the Warden’s role she would be in a position to advantage Gardner, her true love, who had not long before started a stretch for stealing $80,000 from his employer (a charge of which he stoutly maintains his innocence). A big strategist is the new Mrs Burnell – pursuing, wooing, then marrying a Public Health official within a few short months in anticipation that he will accept a posting as a prison warden – all for the sake of her lover.

Burnell is, of course, persuaded to forego his honeymoon and take on the warden’s role; otherwise there would be no story. And he soon makes big changes around the prison. He brings modern, humane treatment to the prisoners and institutes ‘practical trades’ to enhance their job prospects on release. At the same time he sends to the quarry a large number of prisoners who, under the old regime, were able to buy their way out of work. Quickly he becomes feted by the public for the results he achieves, but hated by both his Captain of the Yard, Peter Butler (James Flavin) who was making plenty of money in kickbacks, and the hardened prisoners newly being forced to work.

Mrs Burnell, meanwhile, is offered a driver. She naturally picks Gardner, against the firm recommendation of Butler, but Burnell supports his wife after Gardner saves his life, throwing himself at two villains in the quarry who feel strongly enough about the need to reinstate the corrupt Captain Butler as Warden that they attempt to kill the man standing in his way. Burnell himself knows nothing of the connection between his wife and Gardner, but does find it odd that Gardner claims not to know her when both come from the same small town.

Only the Warden’s forger butler, ‘English Charlie’ Watkins (Reginald Sheffield), who has seen Mrs Burnell visiting Gardner in the prison before her husband became Warden, is alert to the romantic entanglement. He, however, remains discreet in the best British butler tradition, and remains as true to stereotype as the thugs in the quarry and the prison’s crooked senior staff.

Gardner naturally proves to be a cad and a rotter and when he establishes that Mrs Burnell neither loves him any more (“Six months ago you were ready to do anything for me… but you were in love with me then. Now you’re in love with Burnell,” he sulks when driving Elisa to the hairdresser. “Maybe I am,” she says, a bit matter-of-factly), nor will help him get out of prison early, he takes her hostage and drives her towards Merlino, where he has hidden the $80,000 he has always denied stealing. She manages to escape the speeding vehicle; he is not so lucky, shot by pursuing police and crashing. In hospital she is prepared to confess all to her husband, but is prevailed upon by Burnell’s wise friend, the prison doctor, to keep her secret; what good would it do to reveal all now, with Gardner dead and both Mr and Mrs Burnell in love?

Prison Warden is less about the Prison Warden than it is about the Prison Warden’s Wife. But Burnell comes out of it pretty well; he is the idealised movie Warden – fair, reformist, tough when he needs to be, trusting, a servant of the public and brave. Even if he is a silly old codger marrying a woman half his age after knowing her for only a few months, and not realising that he’s been set up. 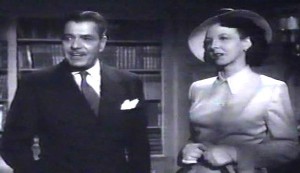 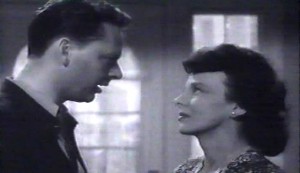