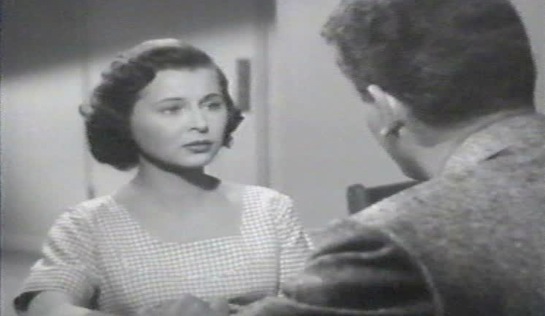 This neat little gangster flick, full of crosses and double crosses, checks in at a lean 60 minutes. The copy I got hold of has around 12 minutes missing from it, and boasts a paltry 6 minutes and 18 seconds of prison scenes. Its title of ‘Prisoners in Petticoats’ might therefore give a slightly misleading impression of the film’s overall content.

Its principal petticoated prisoner is Joan Grey (Valentine Perkins), a sweet, classically-trained musician who, to pay the bills, has resorted to playing piano in the dodgy Bohemia Club under the name of Beverley Brent. The club is owned by gangster Nickey Bowman (Anthony Caruso), who is not averse to disposing of troublesome friends and adversaries. One of his trusted men, bodyguard Steve London (Tony Barrett), overhears a plan for Bowman to knock over a racetrack money truck and decides to do the job himself, cutting out his boss.

The job goes smoothly, other than a handful of people getting killed, and London hides the loot in a suitcase that the unwitting Joan thinks contains some sheet music that she is intending to return to her father’s home. Bowman’s men know that London is the culprit in the racetrack robbery but can’t locate the money. Bowman orders that London be brought in, but in avoiding Bowman’s henchmen London manages to get shot dead by Police.

The DA links Joan to the heist when police find her suitcase which London switched for his… and charges her with complicity in the robbery. She goes to prison not knowing that she has the stolen 100 grand sitting in her father’s attic. It’s not until she’s being interviewed in prison by DA investigator Mark Hampton (Robert Rockwell), who has a romantic interest in her, that she awakens to London’s sneaky suitcase substitution, but she still declines to say anything. “I don’t need to involve any other innocent people,” she says, primly.

The crossed up Bowman arranges for Francie White (Danni Sue Nolan), who with her slain beau Sam had meticulously planned the racetrack job, to breach her parole and go back into prison – to get closer to Joan and the money. Francie contrives to escape with Joan in tow, and as soon as Joan’s in the safe house she phones her father to bring her the money – and phones Hampton to collect it – with Bowman, Francie and the gang all eavesdropping on the calls from the next room. Predictably, all the baddies get rounded up before they are able to get away with the dough and Hampton and Joan get to lock lips.

The prison scenes are… brief, at best. They offer a bit of light relief with an older prisoner, Beatrice (Queenie Smith), stoutly maintaining her innocence over fire-lighting charges and then being transported by the idea of again experiencing the thrill of the flames and the response of the fire brigade. We also see how persuasive Francie can be when she wants something in prison, just as we’d seen her ruthlessness outside it. And unless it’s part of my missing 12 minutes, we don’t see how she and Joan manage to escape; one minute they’re in jail, the next they’re not.

Like Bowman, I feel a little cheated… by the meagreness of those 6 minutes and 18 seconds. The deceptive title nonetheless gives rise to a new diverting pastime for me – renaming films after small and not particularly memorable scenes. I’ll lead off with ‘The Librarian’ for Shawshank Redemption… 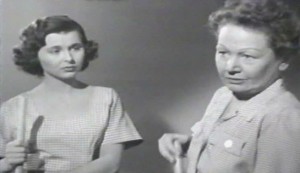 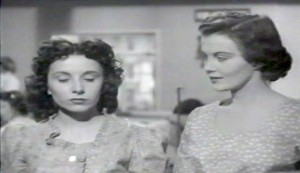