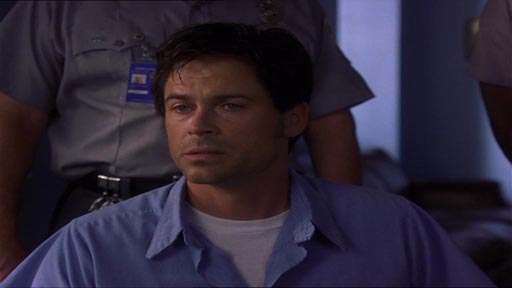 The credits of this film thank the Grafton Correctional Institution and the Ohio Department of Rehabilitation and Correction. You wonder what they got out of being associated with this piece of tripe. Perhaps they weren’t warned about the storyline, because you’d think that they might have wanted to distance themselves from its themes of high level corruption and murder rings operating in Cleveland’s prisons.

Rob Lowe is oddly cast as William Conroy, an unlikely-looking ex-college professor who is nearing the end of his sentence for the drink-driving manslaughter of a student with whom he was having an affair. One night he hears strange noises in the cell next to his, occupied by his friend, Edwin Cole. He calls the guards who tell him that Cole hanged himself. Funny… Cole was just talking to him about the suspiciously high number of prisoners dying at the prison.

Soon Conroy is taken to see the Warden and told not to pursue anything that he might have heard; he wouldn’t want to put his parole in 6 months’ time at risk, would he? Then he’s taken in a van to a surprise parole hearing, where the other inmate in the vehicle suddenly attacks him with a knife. It’s one of those strange plot lines that make no sense. I mean, why would you go to all the trouble of setting a bloke up to be killed, and then needlessly hamper the hitman by having him wear handcuffs?  The van crashes after the driver accidentally cops a stab wound to the shoulder, and the driver then shoots at Conroy just as he’s about to help him and his injured colleague. Conroy runs, contacts his lawyer, and starts to uncover a massive conspiracy.

The outspoken head of a Victim’s Rights group (played by James Coburn) acts on behalf of victims’ families who are disappointed that the person who killed their loved one has not been executed. He pays the Warden big bucks to arrange for those offenders to be killed in prison. The two guards and the psychopath who tried to kill Conroy in the van are in on the scheme. The Warden happily releases the psychopath to track down Conroy and silence him. The two guards instantaneously recover from their car crash injuries and join in the hunt, desperate to track Conroy down to cover up their own involvement.

The film disintegrates very early into one of those extraordinarily ludicrous action thrillers. Prison vans roll over, prisoners escape, cars screech around city blocks and crash at high speeds, shots are fired, houses are intruded and lawyers fall from balconies and wind up dead without seemingly drawing the urgent attention of the Police. Conroy, frightened for his life, chooses to stay in Cleveland rather than run to another State where he’d be safe. Instead, he bluffs his way into the victims’ champion’s office and steals an incriminating video that was poorly hidden and conveniently labelled. Half a dozen times he is almost caught, but escapes, and 32,517 rounds are fired in a crowded shopping mall without any of them hitting their mark and without one innocent person being shot. 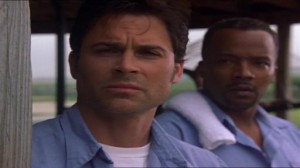