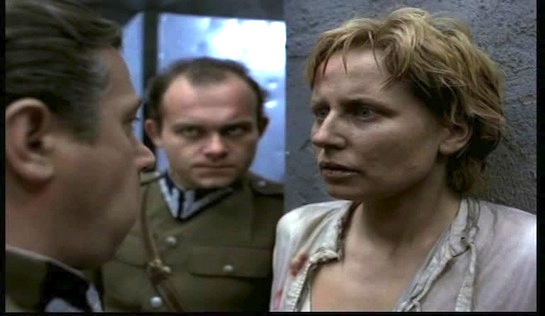 It’s 1951, the 34th anniversary of Great October. Cabaret singer Antonina ‘Tonia’ Dziwisz (the estimable Krystyna Janda) has fought with her husband and goes out drinking with two supposed fans, who pour drinks into her… and then take her to the local prison. When she wakes up, she has no idea why she is there.

She is interrogated alternately by Major Zawada ‘Kapielowy’ (Janusz Gajos) and Lieutenant Morawski (Adam Ferency). They question her (a bit too eagerly) about her lovers, of whom there are quite a few. She is bewildered, but open; wanting to help, wanting to clear the mistake up. But there is no mistake: they are particularly interested in her relationship with a Colonel Olcha, with whom she once had a fling, and who is now suspected of espionage. Her captors want her to implicate Olcha in treasonous activities and to sign confessions.

Tonia is a party girl; full of joie de vivre. But even singers of saucy songs in post-war Poland were presumably aware of the oppressive communist regime that was conducting the wholesale elimination of opponents; her faith in the feared security forces to accept her word that she was not an enemy of the regime would seem to be, well, a tad naive. But she shows backbone, and refuses to sign more untrue confessions than is necessary.

The interrogators cannot be accused of not trying to extract more information or confessions from her. They starve her, slap her, strip her. Kick her. Let the taps run, flooding her cell until she struggles to keep her head above the water. Put the high pressure hose on her, force her to drink her urine. They call her a slut, and reveal to her husband her long list of lovers; he visits, for the first time, to tell her that their marriage is over. They pretend to shoot a fellow prisoner dead and then hold the gun to her head. For the most part, she remains stoic.

But there is then a shift; the unpleasant Lieutenant Morawski falls for her. It’s easy to see why, but not so easy to see why she might reciprocate. She falls pregnant to him, but later has her daughter taken away and placed in an orphanage. She is still in prison when Stalin dies, in March 1953. She has still not been charged. By the time she is finally released, her child is about three, and she is no longer a party girl.

The film was made in 1982, smuggled out of the country by its director, Ryszard Bugajski, and not allowed to be shown in Poland until 1989 when the Soviet-inspired period of ‘glasnost’ brought about greater freedoms of speech. It’s a very damning portrait of the Stalinist regime, but does it have something to say about prison beyond prison’s capacity to be really brutal and one woman’s indomitable spirit in the face of such horror?  Maybe. Putting the torture aside, there are many intersections with the more-routine prison experience: the women’s need for touch and comfort, a desperate suicide attempt, the futile railing at injustice, the wrench of women being separated from their children, the informer…

There are more harrowing films about torture and degradation in prisons, but this is an impressive one. 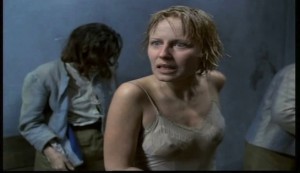 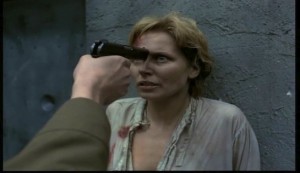