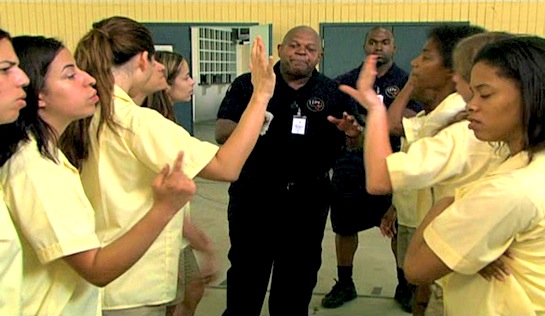 “I really do admire how you change these girls’ lives,” says an opposition coach to Lt Cleveland Stackhouse, just after trying to get the prison team coached by Stackhouse banned from the schools’ track and field championships to which they’ve been invited. “You got it backwards,” replies Stackhouse. It’s that sort of movie; a bit soppy, corny.. but competent enough.

Charles S Dutton (who himself served 7½ years for manslaughter as a teenager) directs this made-for-TV number, and stars as ‘Stack’ Stackhouse, gruff but with a heart of gold. He gets the idea of starting a track team at his Texan youth jail after seeing Vanessa Turner (Yaya DaCosta), a recidivist not far from being transferred to a higher security facility, sprint away from an attack which she led on the leader of the Latina gang.

Oh yes, there are sceptics at first. There are some minor setbacks, too; one girl can’t commit to the team because she’s more interested in heroin-laced-reefers, another slashes her wrists after receiving bad news about her pimp, and Vanessa is locked away in the punishment cells and misses out on a crucial time trial after fisticuffs with her boyfriend, on whose behalf she is in custody, in the visits area.

But of course the program is transformational. The teams are at first divided along strict racial lines, but by the end it’s just one big, happy family. Training for the squad brings discipline and teamwork and hope and purpose and goals and reward for effort. One key member of the 4 x 100 team, Carmen (Zulay Henao), stops an attack by the Latina women on Vanessa, and then expresses appreciation to her sister for bringing in her daughter to see her; her track involvement has clearly made her a better person. And even the tough Lt Baker (Aunjanue Ellis), the biggest sceptic of all, is won over and gets emotionally involved in their journey.

It’s certainly not a bad thing to have a film about breaking down racial barriers and breaking away from the constraints of upbringing and limited opportunity and expectations. One a little less formulaic would be even better.

“Inspired by a true story,” it says. The inspiring story is that of Sgt Noel Chestnut, a guard at the California Youth Authority, who instituted a track program for his charges to break the cycle of re-offending, to integrate racial groups and to make something of their lives.