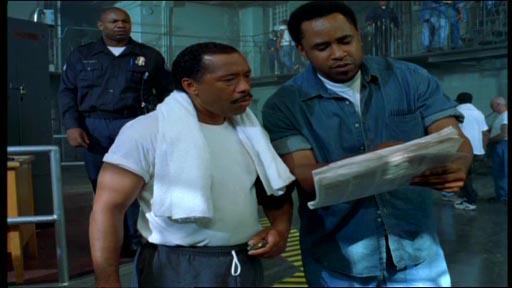 Redeemer is supposed to be about a lifer with an untapped talent for writing being encouraged to write to the sister of his victim – and winning her support for his release after years of staunch opposition. And, yes, he does write a letter to her. A one-page letter. On big paper, it must be said, but even Hemingway might struggle to turn 20 years of bitterness on its head in one page. What this is really about is a marginally unethical teacher gaining the release of his prize student through persistent, harassing behaviour. The end justifies the means, it seems.

‘”What can we do to make this character more sympathetic to the reader?” asks the international best-selling author Paul Freeman (Matthew Modine), who has taken a job at the local Michigan jail teaching creative writing to four prisoners. It’s a bit arse-about, but you get the idea. This is what the film-makers did: they portray the hero, Charles Henderson (Obba Babatundé), as a principled ex-Black Panther (a murderer still in jail after those 20 years while his three co-accused, one of whom actually pulled the trigger, have all been released – just because he refused to cut a deal for something he thought he didn’t do), a respectful and caring man who helps old prisoners, a great dad, a man who missed his opportunity for an education by his one (very) stupid act, and a redeemed man kept in jail at the whim of an uptight, unforgiving woman.

Enter Freeman, whose motives at first aren’t exactly pristine (he’s looking for something on which to base his next book), but who gets carried away by the unjustness of Henderson still being in jail – and sets out to do something about it.

Which is OK, but he does so by gaining the address (somewhat improperly) of the person who has formally objected to Henderson’s release at each commutation hearing – Sharon Davidson (Michele Greene), the sister of a young man shot and killed by accident in a misconceived drug raid on a hippie house – and badgers her at her home and then again at her daughter’s soccer match. Worse, showing no sensitivity to her as a victim, he discloses her address to the man convicted of killing her brother.

Henderson writes to her. It’s not an especially well-written letter, from what we can see… but he does apologise. Sincerely. Freeman then takes Henderson’s presentable son, Kendall, along to her place and invites himself and the young man in for coffee. On leaving, he tells Ms Davidson, “You’re in prison as much as Charles is. You both deserve to be let out.” Despite his rudeness, he’s right, and luckily for all of them, his observation strikes a chord. She is consumed by fear and bitterness and an unhealthy need to protect her daughter from everything. Next time around, she appears at the commutation hearing and speaks in favour of Henderson’s release.

It’s an unusual movie prison. None of the usual movie prison tensions are particularly evident. Freeman’s class contains Aryan, African American and Hispanic prisoners, who show little desire to kill each other. At least Henderson’s character, a mixture of intelligence, emotional closed-offness and defensiveness, toughness and arrogance has an uncommon plausibility.

But this is not about the best of people being dragged out of them against the odds. If you were expecting To Sir, With Love or Finding Forrester or even Shackles, you have the wrong genre. 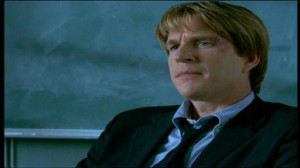 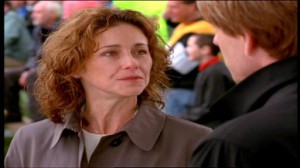