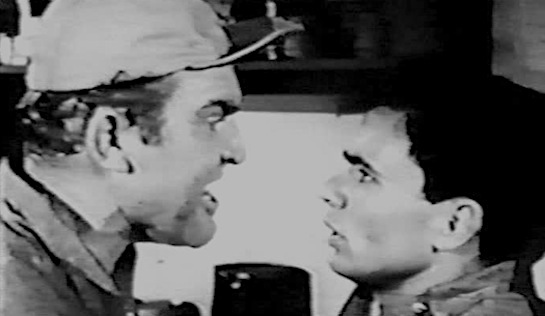 This little known film noir is a prison movie in the classic mould, and features one of the coldest, most heartless prison bad guys going around.

We’re introduced to crime boss Lou Gannon (Gene Evans) just after he has been sentenced to 20 years for an armed robbery, but what is more notable is the string of robberies and murders of which he has previously been acquitted.

He quickly appoints himself the prison’s top dog, Ed ‘Bugsy’ Kyle (a typically edgy Timothy Carey) willingly stepping aside for him. He also wastes no time in putting escape plans in place, the first of which are to have machine gun pieces smuggled into the prison. For all his power and influence, he manages to stay low-key, secure himself a nice quiet job and even be something of a paternal figure to his young cellmate, Rudy Hernandez (Robert Blake).

Gannon and Hernandez are both first-timers, but are miles apart in their outlook and aspirations. Hernandez is serving five years for being the driver in a robbery in which a person was killed, but he is desperate to put himself in line for parole after three. He works in the garage, is studying, and is remorseful. Gannon, however, has other plans for him. Without any qualms he sets the younger man up, arranging for suspicion to be cast upon him for the stabbing of a prisoner who got cold feet sought to bail out of moving gun parts around the prison. Hernandez comes out of a stint in solitary a changed man, realising that his chances of parole have evaporated, and wanting to be part of the jail break.

One of the guards stumbles across one of the gun parts being smuggled into the prison in a large cake of soap, and of course a massive search of the prison is then undertaken. When the guards get a bit close to the location of the three guns that have been assembled, Gannon cleverly arouses their suspicion about another area, where they duly find some ancient weapons stashed away – and walk away happy.

Gannon fast-tracks the escape. He, Bugsy and others manage to overpower guards before let-out and then release prisoners from their cells.  The prisoners need little encouragement to riot, although it’s a very tame riot as far as riots go. Gannon tells the warden that if his guards shoot, the growing number of guard hostages that the prisoners have taken will also die. Bugsy detonates some dynamite at the main gate, as per Gannon’s plan, and it is only then that Hernandez stumbles upon Gannon in the process of escaping from the prison nursery – well away from where all the other action is taking place. Hernandez quickly realises that Gannon’s elaborate hostage-riot-dynamite plot has simply been a diversion designed to provide cover for his own escape – and that to facilitate it Gannon was prepared to sacrifice all his associates, condemning them to be mown down by the line of machine-gun-wielding guards waiting outside the main gate. Gannon kills Hernandez before he can warn the others.

This is a very respectable – and enjoyable – prison movie. Filmed largely in Folsom Prison, it has a smart blend of humdrum prison routine, suspenseful prison action, subtle characterisation, and sheer bastardry. Gannon’s psychopathy is not overplayed, and indeed he lacks the charm of many psychopaths, but his skilful manipulation of his many fellow prisoners, and his complete disregard for any of them, puts him in the elite class of prison bad guys. It’s good stuff.

Big thanks to Melian for the revolting source.