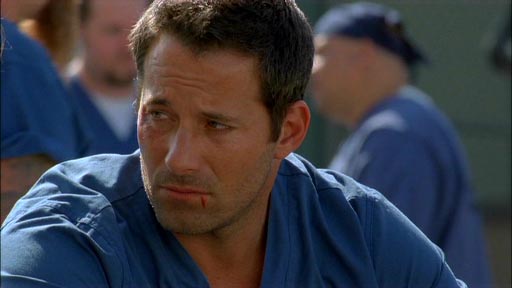 Burke Wyatt (Johnny Messner) used to be a cop before he got a little rough with a child abuser. Now driving trucks and no longer living with his wife, he is recruited by his ex-partner, now with the FBI, to go undercover at California’s Cainesville State Prison, where there have been a lot of unexplained deaths. In prison he is soon drafted into no-holds-barred fights (shown live on the internet) where the prisoners are sometimes so badly beaten they die. He gets badly hurt himself. That could explain the deaths, then. “Got some leads,” he says in a smuggled message back to the FBI. “Need more time.” No doubt he was a good cop, just not the sharpest.

The prison is run by hammy Warden Carl Golan (Stacy Keach), a glassy-eyed ex-pug who has struck a deal with a wealthy crime figure (the sort who has semi-naked women draped over him as he works): Golan brings the fighters together, tosses in a crowbar or baseball bat when the fist fights get boring, while the crime boss, Wheaton, attracts internet subscribers and a succession of wealthy men and their (clothed) women to watch the prisoners beat each other to a bloody pulp.

It is no more and no less far-fetched and predictable than any of the many undercover-cop-in-prison movies. But it distinguishes itself from others through its schmaltziness  – by having Burke’s relationship with his son, Tommy, at the centre of everything (he is, of course, a doting dad who only wants to do the best by his son), and by the sheer brazenness of the Warden’s corrupt activities.

One supposes that Golan’s recklessness is intended to be a symptom of an undiagnosed psychiatric condition, but things get more and more bizarre once he discovers that Burke is trying to expose him. Not content with taking the ordinary risks associated with running illegal operations on which any of his staff, prisoners or visitors could blow the whistle at any time, Golan has his staff murder two inconvenient prisoners and then kidnap Burke’s ex-wife and son (shooting an FBI officer in the process) – so that the family members can watch Burke (who has already been softened up by various forms of torture) be killed by ‘The President’ (Lester Speight), a hulking African American who is not at all averse to killing his opponents. The kidnapping probably reduces the chance of a successful cover-up, but of all those who won’t be able to avoid being implicated when the Warden’s scheme is uncovered, none try to stop him. Odd.

Burke gets his wife back and his job back (well, a new job with the FBI, that unfortunate incident with the child molester having been erased from memory, together with the assault of the police officer and theft of the policeman’s car that got him his 5-year stretch in Cainesville). The FBI doesn’t worry about such trivia, apparently.