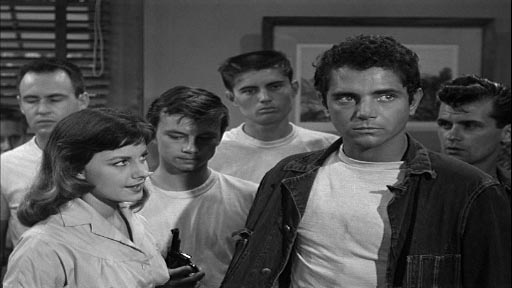 Let’s face it – for a movie supposedly about a riot in a juvenile prison there’s precious little rioting, far too few juveniles, and way too much sententious guff about prison reform. Not that that detracts from the film in any way…

The first thing you notice about these 16-year-olds at the Ditman Hall State Training School for Boys is that they all seem to be in their mid-20s. The next thing is how easily you can spot how these mid-20s men ended up in jail; they’re not smart. Early scenes show their leader, Eddie Bassett (Scott Marlowe), whacking the gate operator (who has just let a van out of the prison) over the head. Rather than steal his keys to open the gates, he steals his gun, attacks the warden in order to steal more guns from the warden’s office, then leads a group of inmates in a convoluted escape route through an open drain, whereupon they are fired upon by guards, with two of their number shot dead.

They were trying to escape, it seems, because they were beaten and mistreated, all in the name of much-needed discipline. The Governor decides instead on a brave new tack, and appoints Dr Paul Furman MD (Jerome Thor) as the prison’s Social Psychiatry Training Advisor to set the new approach. The warden, Colonel Ernest Walton (John Hoyt) is left in situ to ensure that there is the right amount of tension at the top as they duel correctional philosophies.

Dr Furman is unconventional. He decides that a co-ed system will encourage normalised behaviour, and imports young girls (also in their mid-20s) from the Larkin Home for Girls. This leads to more tut-tutting from the old school, including one of the girls’ guards, Grace Hartwell (Marcia Henderson), who is grievously concerned about her charges being the subject of a social experiment, but doesn’t object one little bit to the thrust and parry with Dr Furman.

There are the inevitable teething problems, largely the result of rivalry for Eddie’s affections by Kitty (Virginia Aldridge) and Babe (Dorothy Provine), but then Dr Furman’s policies take hold: there are classes and trades being taught, dances and movies and everyone is getting on famously – except Eddie, who resents the way that everyone has stopped bucking the system and fears being psychoanalysed in Dr Furman’s scientific approach to penology. Worse, Dr Furman plans to rid Ditman of all its guards, robbing Eddie of the chance to avenge the death of his two mates who were shot in the earlier escape bid.

At a dance, the jealous Babe and her co-conspirator, Stu (Dick Tyler) lure Kitty into a storeroom where Stu is about to sexually assault her… until Grace intervenes, just in the nick of time. It’s nonetheless a huge, huge scandal, all over the papers, and Dr Furman is forced to resign.

Col Walton gleefully resumes his iron-fisted regime, and the girls prepare to go back to Larkin.  The hateful Eddie immediately gets his chance to get back at the guard who killed the two kids; he takes him hostage, the 20-year-olds break into the same flimsy gun cabinet that hasn’t been strengthened since the last time it was broken into, and they all embark on a fairly tame riot.

Things aren’t looking good for the hapless guard, until they call for the only man who can talk some sense and decency into these crazy, out-of-control kids – Dr Furman! With Col Walton cowed and impotent, brave Dr Furman strides into the hostage scene and with some straight-talkin’ gets Kitty to talk Eddie and his followers into putting down their weapons.

“Dr Furman had found the key to the hearts of the boys. He had made them realise that there was a decent world waiting for those who earned it,” says the narrator.

This is a warm-hearted 50s flick, full of good looking young men and women, love stories, science, the triumph of a humane correctional approach over a repressive one, a prison that looks like a big house, fights in the making of which certainly no-one one got hurt, and solemn lessons about how even young punks will respond like good boys if treated half decently. 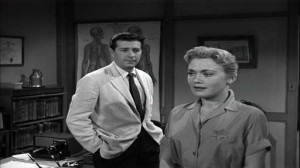 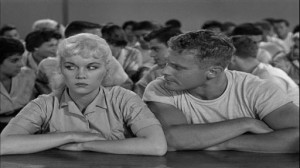